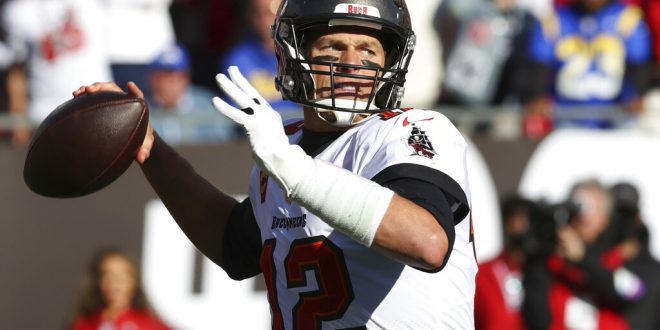 FILE - Tampa Bay Buccaneers quarterback Tom Brady (12) throws a pass against the Los Angeles Rams during the first half of an NFL divisional round playoff football game Jan. 23, 2022, in Tampa, Fla. While the NFL conference championship games went on without Brady for only the second time in 11 years, the world waits for the greatest quarterback of all-time to make his future plans official. An announcement is expected soon and a person close to Brady on Sunday, Jan. 30, 2022, told The Associated Press his decision will be based on family priorities, not finances. (AP Photo/Mark LoMoglio, File)

What’s going on with Tom Brady?

Tom Brady is retiring from football after 22 extraordinary seasons, multiple sources tell @JeffDarlington and me.

Yet, just as the news began to sink in, conflicting reports came to light. Allegedly, the Buccaneers quarterback has not notified any teammates of his decision, nor, were general manager Jason Licht or head coach Bruce Arians aware. To cast even more doubt, Brady’s father announced the five-time Super Bowl MVP is no where close to making a decision on retirement.

JUST IN: Tom Brady Sr. tells @kron4news that his son is not retiring. Brady Sr. says an online publication started circulating an unsubstantiated rumor. However a number of NFL insiders are now reporting it. @kron4news #TomBrady #NFL

With no word from the man himself, NFL brass and fans alike are left puzzled. After 22 historical seasons, will the superstar finally hang up his cleats? Or, will he return for one more chance at elusive ring No. 8?

After winning Super Bowl LV, fans speculated the then 43-year-old QB would never retire. Surely, the three-time NFL MVP confirmed such beliefs by putting forth a strong campaign in 2021. In 2021, the Bucs’ QB threw for a league leading 5,316 yards and 43 touchdowns. Leading Tampa to a 13-4 record along with a NFC South championship, he found himself in strong contention for MVP No. 4.

Yet, the Bucs fell to the Rams 30-27 after a late comeback attempt was thwarted in the divisional round. Immediately after the game, Brady was non-committal about his NFL future citing the need to discuss with his family before making any decisions. On his SiriusXM podcast ‘Let’s Go!’ with Jim Gray, the former Patriots QB remained non-committal, once again mentioning the desire to spend time with his family.

Buccaneers' QB Tom Brady said on his "Let's Go!" podcast with @JimGrayOfficial that family will play a big role in deciding his future:https://t.co/Sbid7gxemI

Fans have speculated his retirement for years, but Brady has never been so vague towards his future. It seems this time around might be different, with former teammate Julian Edelman saying on Barstool Sports’ ‘Pardon My Take’ that bringing his family into the fray opens up the possibility of retirement.

Thanks for the memories, babe. @TomBrady pic.twitter.com/lCqCVn13tI

There is no timetable on when Brady will make an announcement. However, the QB will be making his weekly SiriusXM appearance Monday with Jim Gray, so an announcement could come there. If he announces a return in 2022, the season will likely be his last as he chases a mind-boggling Lombardi Trophy No. 8.

But, if Brady announces retirement, there will be no shortage of options. For one, he can take the Drew Brees/Tony Romo route and enter straight into the media booth. Or, he can take a more Peyton Manning type approach in business outside of football along with select media appearances, such as Peyton’s Places and his Monday Night Football telecast. Certainly, no team would deny the 22-year veterans services in a front office either, as management or coaching could be a viable path down the road.

Though, one things for sure: Brady wants to spend more time with his wife and children. So, if he does opt for retirement, don’t expect to see his next move right away. And if he does decide to hang it up, that opens the door for former Gator’s quarterback Kyle Trask. Trask was selected in the second round of the 2021 NFL Draft by Tampa and did not make an appearance in his rookie season. Surely, he would look to build off his legendary career at Florida, where he was a Heisman finalist in 2020.

Sam Petosa is a Journalism major pursuing a Specialization in Sports and Media at UF. The South Florida native produces daily shows for WRUF, including "Sport Scene with Steve Russell, and "The Tailgate." In addition, Sam provides weekly sports updates for WUFT News and radio Sportscenter's for WRUF radio. Sam has been a writer at ESPN Gainesville since January 2020.
@sampetosa5
Previous Pat Dooley’s Back Nine (Jan 31st)
Next Matthew Stafford headed to Super Bowl