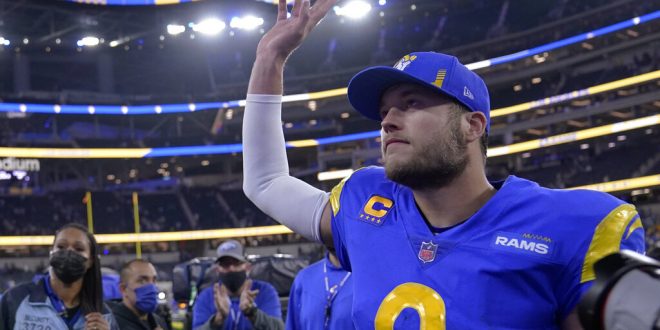 One year after being traded to the Los Angeles Rams, Matthew Stafford led the Rams to a 20-17 comeback win over the San Francisco 49ers in the NFC Championship Game Sunday night. The thirteen-year NFL veteran and former Lions quarterback finally make his way to the NFL’s largest stage.

Bagged a berth to the Super Bowl. pic.twitter.com/86gv5gW894

To the Super Bowl

In all of the three playoff appearances Matthew Stafford made in his 12 years with the Detroit Lions, he lost every one of them. Also, this season he has gone 3-0 in the playoffs after finishing the regular season at 12-5 and with a NFC West title.

The former No. 1 overall pick of the 2009 NFL Draft landed in Los Angeles after the Lions traded for QB Jared Goff and a 2021 third-round pick and first-round picks in 2022 and 2023. Stafford’s immediate success with the Rams proved that the 33-year-old is capable of producing in big moments.

After the game, Stafford spoke on what the win meant to him, and he described it as a long time coming.

In Sunday night’s showdown, Stafford threw for 337 yards and two touchdowns. He also finished with a 68.9% completion rate. He completed 31-45 in the nail biter.

At the receiving end of the two touchdowns was Cooper Kupp. The five-year veteran had a stellar season and is the key piece to the Rams’ offense. Additionally, the 28-year-old led the league in receiving yards with 1,947. Stafford said that Kupp’s success makes the team successful, and that he is lucky to be his teammate.

The 2022 Super Bowl will be held at the home stadium of the Rams, SoFi Stadium in Inglewood, California. This makes the second-consecutive and second-ever Super Bowl to feature a team playing in its home stadium.

The Rams’ appearance in Super Bowl LVI will mark their first as a Los Angeles-based team and their fifth appearance. The Rams will be seeking their second Super Bowl title.

Super Bowl LVI is scheduled for February 13, kick-off is slated for 6:30 p.m.