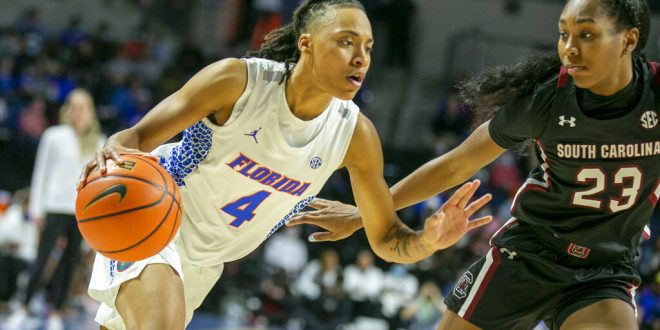 Looking at the Gators

Against the Gamecocks, UF’s Kiara Smith finished with 22 points, almost half of Florida’s total points scored in the game. The guard also sits 26th nationally with 52 steals on the year so far. The next closest scorer for the Gators points wise was Zippy Broughton with 11.

The Gators defense overall was impeccable in the Sunday matchup. UF forced 21 turnovers against their top-10 opponent, which is the second-highest number of turnovers for South Carolina so far this season. Additionally, Florida’s defense only allowed the Gamecocks to score a mere 62 points, which is South Carolina’s second-lowest scoring output this year. With this performance, the Gators received votes in both the AP Poll and Coaches Poll for the second consecutive week.

The Volunteers capped off an 86-83 overtime win over Arkansas Monday. Tennessee’s Jordan Horston racked up 24 points in the game, followed closely by teammate Rae Burrell with 21. Horston also had 11 rebounds in the game, the most by a Volunteer in Monday’s matchup. Vols Sara Puckett came close behind Horston in rebounds with 10, helping lead to her first career double-double after she put 10 points on the board.

On top of its offensive dominance, Arkansas overcame a 13-point deficit in the third quarter to claim its second overtime win.

Kaitlyn Wadulack is a third-year journalism student specializing in sports and media at the University of Florida. You can reach Kaitlyn at k.wadulack@ufl.edu
Previous College Football National Signing Day sees Texas A&M with the top class despite controversy and Florida Gators finish strong
Next Officially Revealed: the Washington Commanders 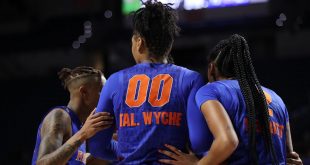