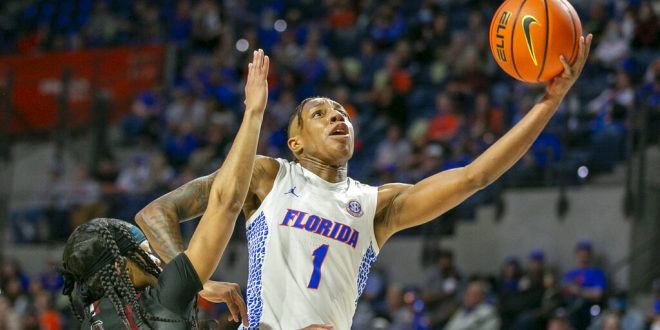 Within in the nearly 4,000 member sea of orange and blue, was a vocal, respectfully-sized group wearing Tennessee Orange. The Gator faithful in Exactech Arena, and especially those wearing blue on the court, had their own message to voice, though. It was 25 points louder.

“We are enough,” Jordyn Merritt repeated the team’s motto in the post-game press conference.

On Thursday, the Gators (16-6, 6-3) earned their sixth victory in seven games, beating their first top-10 opponent since 2015. The 84-59 win came against a legendary opponent in the No. 7 Tennessee Volunteers.

Prior to the buzzer, Tennessee boasted a 54-4 series advantage over Florida. Florida’s last two victories over the Lady Vols came in 2009 and 2016, when the squads posted about .666 records. The loss dropped this year’s Tennessee squad dropped to 19-3 overall and 8-2 in SEC play.

So far this year, the Gators lost their coach due to alleged abusive behaviors, lost star guard Lavender Briggs to the transfer portal, and shocked most of the country to be tied with Ole Miss and LSU for third place in the SEC in the final month of the season.

Amid adversity, interim head coach Kelly Rae Finley saw the Gators efforts in preparing for games and believed in her players. Finley did not want to downplay Thursday’s win, but said she has not been surprised by her team’s success.

Whether it’s arriving early for shootaround or hustling on the court, Florida seems willing to make the extra effort. Rae Finley said the Gators rebounding stood out to her — they outrebounded Tennessee 40 to 38.

The Volunteers are a big, lengthy team who generally outrebound their opponents by 20. Meanwhile, the Gators possessed a speed advantage through guards Zippy Broughton and Kiki Smith. They also have developed a next play mentality that enables them to play better, Finley said.

Guard Smith, who led the game with 25 points, said after the game that the Gators can compete with any team. The “We are enough” motto means that whatever happened in the past at UF is in the past and doesn’t concern the team now.

6-foot-3 forward  Merritt said the idea of the team being good enough sunk in on Day 1. To her, “We are enough” means the team doesn’t need validation from anyone.

As far as outside validation, many may question why Florida has not been ranked as it earned its fourth ranked of the season. Finley laughed that she doesn’t have an answer. For now though, she’s happy to keep the role of scrappy underdogs; the Gators know they are good.

Tennessee scored the first three, which could have been scary given No. 1 South Carolina’s rout to start the game last Sunday. However, Florida bounced back to go ahead 9-3 via a nine-point run. The Lady Vols put up some runs, but would never regain the lead.

As the Gators closed out the first quarter ahead 25-18, Broughton led the way with seven points.

Moving to the second quarter, things got choppy as the Volunteers tossed up one, two, three, then four baskets from the paint that failed to go in. Florida grabbed a rebound and junior Nina Rickards drove the ball down the court for a layup, drew a foul and converted the three-point play. Florida took a 30-20 lead. At 7:44, Tennessee called a timeout.

The Volunteers had 13 turnovers in the first half, and Florida was able to convert 19 points off of them- over half of their score.

Finley said that during halftime, she spoke about how the tall Tennessee roster (starter Tamari Key is 6-foot-6) would try to force things in the paint. Florida would continue to force their opponent shoot threes.

The Gators quickly got to business in the second half and the Gators concluded the game on an 11-1 run.

Beyond rebounding and defense, Finley praised the Gators ability to balance their fast pace with minimal turnovers. They posted an 18 assists to nine turnovers ratio. In contrast, the Lady Vols recorded eight assists compared to 18 turnovers.

The Gators concluded the game on an 11-1 run and happily huddled up. Soon they had shared with Tennessee a handshake and their worst loss to a non-ranked team since the debut of the AP poll in 1976.

The Gators took a lot of high-percentage shots and converted; they shot over 60% in every quarter besides the second. They held Tennessee to a 38% field goal percentage.

Florida embarks on a three-game road stretch, beginning Sunday against another ranked opponent in No. 14 Georgia. The Gators previously lost 73-69 to the Bulldogs (17-4, 6-3) on January 2. 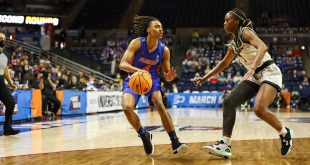