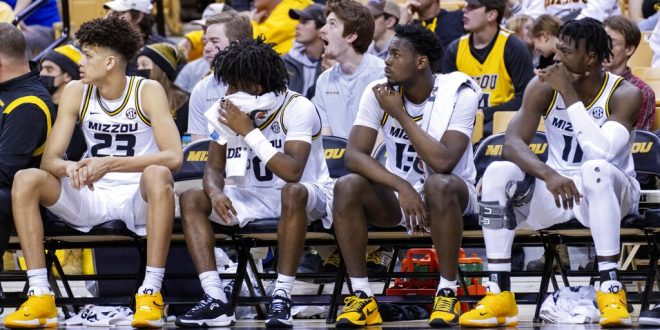 Missouri players watch the final minutes of their 66-65 loss to Florida during the second half of an NCAA college basketball game Wednesday, Feb. 2, 2022, in Columbia, Mo. (AP Photo/L.G. Patterson)

Both the Rebels and Tigers come into this matchup looking to get back on track. Ole Miss has lost two in a row, dropping down to 12-12 on the year. While Missouri has lost four of its last five and is now five games under a .500 winning percentage.

These two teams met once earlier this season on Jan. 18. In their first matchup, the Tigers came out victorious, blowing the Rebels out by 25.

Missouri was led by Junior Guard Amari Davis. Davis had a season-high 23 points, shot 10-10 from the field and was perfect at the line with three free throws. Junior Forward Kobe Brown helped Davis with 15 points of his own and seven rebounds. Brown is Missouri’s leading scorer averaging 12.9 points per game on the season. He will have to play well again if the Tigers want to sweep the season series against the Rebels this Saturday.

In their first matchup, Missouri held Ole Miss 15 points under their season average of 67.9 per game. Ole Miss struggled to produce offense against Missouri while at home. Now they are set to face Missouri once again, but now on the road.

Ole Miss will look to carry the offensive momentum from their loss to Alabama on Wednesday. The team scored 83 points led by Senior Guard Jarkel Joiner who had a career-high 33 points despite the loss.

Joiner leads the team in scoring with 14.5 points per game. An offensive explosion like this on Saturday will help the Rebels avoid getting blanked by the Tigers again.

This matchup is statistically even. Ole Miss averages 67.9 points per game and Missouri averages 66.1. They both shoot about 43 percent from the field and average about 35 rebounds per game. The Rebels have a 3-8 record in the SEC, while Missouri is 3-7.

Missouri has opened as the betting favorite as they are the home team, but this game could go either way. Will Missouri shut down Ole Miss once again? Or will the Rebels come to play and hand the Tigers their fifth loss in six games?