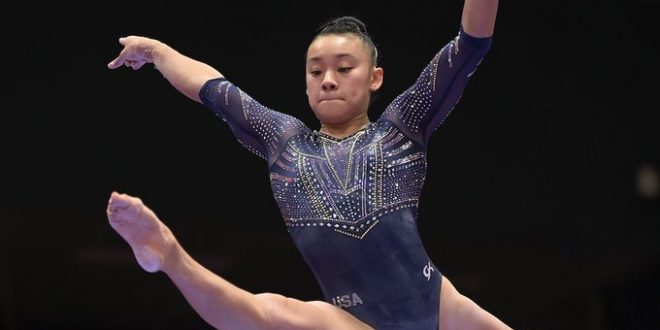 Freshman Leanne Wong competes and shines in the World Gymnastics Championships. Her performances in the initial rounds earned her a spot in the final on Thursday. (Credit: FIG via Twitter)

SEC Powerhouses Clash in the Swamp

Florida has been a dominant presence in SEC gymnastics, and LSU is their next test.

Jenny Rowland promised Gainesville a winning team, and she delivered. The Gators are undefeated so far, and look to stay that way. This team has made waves in the world of college gymnastics, showing themselves to be one of, if not the best in competition. The team is as connected as you can be, with each of the ladies ready to back up their teammates on and off the floor.

Two particular gators stand out from the crowd, however. Leanne Wong has put up numbers through the Gators’ seven wins, setting a school record on the Uneven bars. The freshman came in with a mission, and she is on the way to completing it. She has become a name people know in gymnastics, and has a promising four years ahead of her. Florida will be leaning on her to do what she has been tonight, hopefully gaining the edge over the tigers.

Leanne Wong and the pursuit of the perfect 3/1 pic.twitter.com/yIj3iO7P5X

There is one gymnast that the whole country has started to know: Trinity Thomas. The 18-time All American has been the backbone of Florida gymnastics for her four years in Gainesville. Most recently, Thomas landed a match winning 10 against Alabama on Jan. 16, which happened to coincide with the first gymnastics match broadcast on national television. Thomas entered the University of Florida on fire, and has not cooled down since.

SEC Contest: Taking on the Tigers

Only two undefeated teams remain in the SEC, and they will be meeting in the O-Dome Friday night. Both programs hold themselves to the highest standards, and with both in the top five, it shows. The Tigers and Gators have both hosted impressive wins, and as a continuously dominant program, LSU will be no easy feat.

The Tigers are led by Haleigh Bryant, a sophomore who has been turning heads since her freshman year with her floor routines, while Grad Student Christina Desiderio has been having the best season of her career.

LSU is not a program to take lightly, and tonight Gainesville will welcome them at full force.