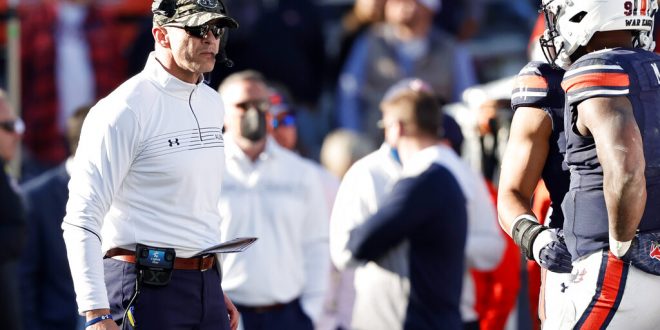 Auburn head coach Bryan Harsin waits for an video replay review during the second half of an NCAA college football game against Mississippi State, Saturday, Nov. 13, 2021, in Auburn, Ala. (AP Photo/Butch Dill)

After a tumultuous last few weeks, Auburn elected to remain with Bryan Harsin as the Tigers’ head coach.

After Harsin’s first season with the program, the two parties went back and forth after the team finished 6-7 with a bowl loss to Houston. Once the season ended, the Tigers had five assistants leave the program, including offensive coordinator Mike Bobo and defensive coordinator Derek Mason, who took a 400K pay cut to jump to Oklahoma State. Another assistant, outside linebackers coach and special teams coordinator Bert Watts, may also leave to the NFL.

The coaches were not the only ones to leave, as over 20 players entered the transfer portal, and others pondered doing so. Many Auburn transfers followed former AU coach Gus Malzahn to UCF.

On the recruiting trail, Auburn also struggled, only signing eight four-star prospects in 2022, good enough for the eighth-best class in the SEC. To make matters worse, the Tigers did not sign a single prospect on National Signing Day.

The two parties address the situation

After the SEC coaches meeting on Thursday, the two parties stayed silent until Friday.

Bryan Harsin is staying at Auburn, here's his statement on the past week of speculation about his job: pic.twitter.com/uiJTVRP4T7

On Saturday, Harsin made an appearance at the AU basketball game against Texas A&M. Despite his struggles on the field in year one, Harsin was welcomed by fans and students alike.

What is next for the Tigers and Harsin?

Moving forward, the pressure is mounting for Harsin to compete in the juggernaut that is the SEC West. The Tigers could not afford to cut ties with Harsin for cause, yet Auburn fans and boosters are clamoring to compete yearly. After finding no cause to cut Harsin from his contract, Auburn had no choice but to retain the 45-year old head coach.

ESPN's @PeteThamel: "If Auburn was to fire Bryan Harsin not for cause and pay him the full buyout, that would be nearly $40 Million dollars committed to coaches who aren't coaching, in the last 14 months."

Expectations will continue to be high for the Tigers, and recruiting must pick up if Harsin wants to get Auburn at the top of the SEC West.

Auburn will kick off its season on September 3 against Mercer.