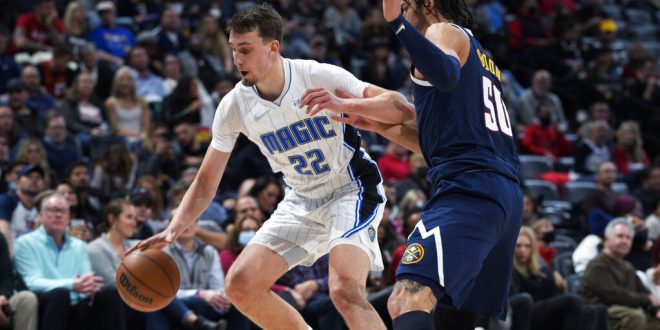 The Orlando Magic closes out their four-game West Coast road trip with a near comeback victory against the Denver Nuggets, Monday. With the 121-111 victory, the Nuggets have now won four of their last five games.

Reigning league MVP Nikola Jokic recorded his 45th double-double on the year. The four-time All-Star had a team-high 26 points and 15 rebounds, as the Nuggets never led by fewer than eight points.

Entering the game, the Magic came off a 27-point blowout loss to the Phoenix Suns days prior and it looked like another long night for the 13-win squad, especially early. The Nuggets were up by as many as 20-points in the first quarter and 15 entering the second. But, the Magic just wouldn’t go away.

A valiant effort moving forward as the Magic outscored the Nuggets for the remainder of the game. Wendell Carter Jr. played inspiring basketball collecting 12 rebounds to go along with his 25 points. The Nuggets relinquished 23 turnovers for 29 Magic points.

Denver, once again, extended their lead to a comfortable 21 points early in the fourth quarter, looking to cruise to the win. Instead, the Magic made it a game late. After a Carter slam with 6:37 remaining, Denver only led 99-87. However, having six players scoring in double digits helped fend off the comeback.

Coach Jamahl Mosley was very pleased with the teams’ competitive spirit in his press conference after the game. The magic young core of Franz Wagner, Jalen Suggs and Cole Anthony continue to show promise.

Wagner, who was selected eighth overall in last year’s draft, has strung together a nice string of games for Orlando. So far, his rookie campaign has consisted of impressive numbers including this 26-point and eight-rebound night.

The German forward isn’t the most athletic, but the recent offensive surge has begun some recent Rookie of the Year considerations around the league. For the year, Wagner averages 15.6 points and nearly five rebounds per game.

The NBA Free Agency period began Thursday, shaking up the league with many NBA players …