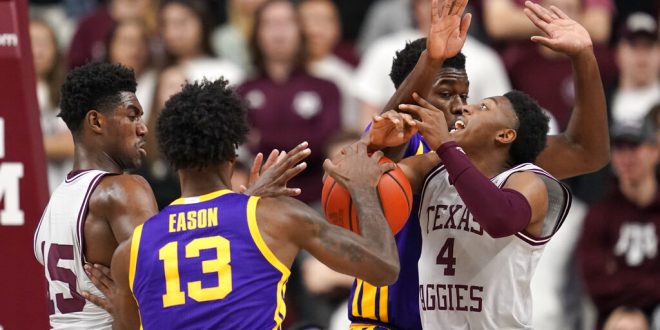 LSU forward Tari Eason (13) knocks the ball away from Texas A&M guard Wade Taylor IV (4) as he drives to the basket during the second half of an NCAA college basketball game Tuesday, Feb. 8, 2022, in College Station, Texas. (AP Photo/Sam Craft)

It has been exactly a month since the Aggies last won. On Jan. 15, the team narrowly beat Missouri on the road by a score of 67-64. In this matchup, the team rallied from a 13-point deficit to pull off a victory against the Tigers.

Since their last victory, the Aggies have fallen to Kentucky, Arkansas, LSU, South Carolina, Tennessee, Missouri and Auburn.

After their victory against Missouri, the Aggies returned home to face Kentucky. While Texas A&M held on in the first half, the Wildcats pulled away in the second to win 64-58.

From there, the Aggies fell to Arkansas in overtime, couldn’t hold on in the second half against LSU and were defeated at home by South Carolina and Missouri.

Takeaways From Loss Against No. 1 Auburn

A&M fell 75-58 to Auburn, which extended their losing streak to eight games.

Against Auburn, the Aggies made only 19 shots over 40 minutes, recording their worst shooting percentage of the season at 27.1%.

The Aggies have proven they can attack the paint. The problem? Finishing.

Texas A&M has another opportunity to clean up their inside game against Florida on Tuesday: https://t.co/XO541SjOMg

Throughout the past few games, the Aggies have experimented with various starting lineups. Senior guard Quenton Jackson, sophomore forward Henry Coleman III and junior guard Tyrece Radford combined for a total of 34 points against the Tigers.

Head coach Buzz Williams and the Aggies will look to snap their losing streak in their home matchup against the Florida Gators.

Coleman leads Texas A&M in rebounds at 6.2. He has put down back-to-back doubles, with 10 points and 13 rebounds versus Auburn and 12 points and 12 rebounds against LSU.

Throughout the game, A&M will look to their key players, forcing rebounds and their home-field advantage to turn their season around against the Gators.