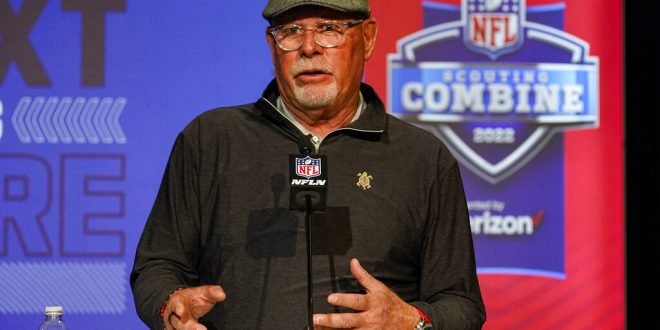 February, with a list of accolades longer than a CVS receipt, former Tampa Bay Buccaneers quarterback Tom Brady announced his retirement from a 22-year NFL career.

During his two year tenure in Tampa, the team won its first Super Bowl since 2002, its first NFC South title since 2007 and 13 games for the first time in franchise history.

The Tampa Bay Buccaneers have had 14 starting quarterbacks since the team won Super Bowl XXXVIII. From 2008-2019, none of those quarterbacks were able to lead the Bucs to a playoff appearance.

The team will hope that a Brady replacement keeps the team out of the state of limbo its seen since its inception. No quarterback in Buccaneers history has spent six consecutive seasons as the team’s starter.

With the draft combine looming, Tampa Bay Buccaneers general manager Jason Licht has his work cut out for him. Guard Ali Marpet earned his first Pro Bowl appearance this season before abruptly retiring, leaving the team’s offensive line without one of its stalwarts. To add to any offensive line worries, center Ryan Jensen is a free agent.

Jensen is far from the team’s only player entering the offseason without a contract. Star wide-receiver Chris Godwin, who played the 2021 season on a franchise tag, will draw numerous suitors on the open market.

Cornerback Carlton Davis is a free agent as well. The Bucs will also await an answer from tight-end Rob Gronkowski, though Licht said the team has been in contact with Gronkowski’s agent.

Since his tenure started in 2014, the NFL draft has been kind to Jason Licht’s Buccaneers. Three of the last four first rounds have brought first team all-pro tackle Tristan Wirfs and Pro Bowlers Vita Vea and Devin White to Tampa.

The team snagged Pro Bowl safety Antoine Winfield Jr. in 2020’s second round, and Chris Godwin in 2017’s third round.

Head coach Bruce Arians said 2020 second round pick Kyle Trask will get a chance to compete to be the team’s starting quarterback.