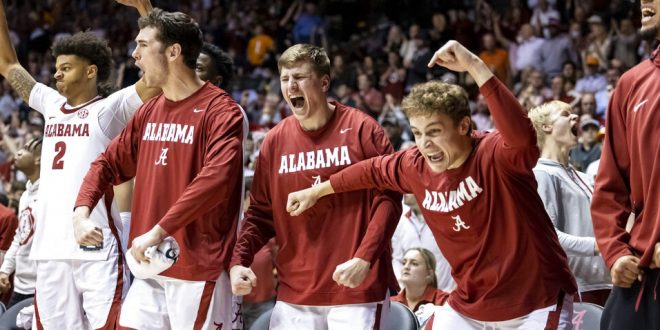 Alabama's bench cheers during the second half of the team's NCAA college basketball game against Tennessee, Wednesday, Dec. 29, 2021, in Tuscaloosa, Ala. (AP Photo/Vasha Hunt)

The Crimson Tide host the Aggies in preparations for tournaments

Wednesday, the No. 25 Alabama Crimson Tide host the Texas A&M Aggies in Tuscaloosa at 7.

Both teams are coming off of two wins after a loss. Going into the SEC Tournament, the Crimson Tide ranks fifth in the SEC and the Aggies come in at tenth.

Alabama about to clinch an NCAA tournament spot

The Crimson Tide holds a 19-10 overall record and is 9-7 in conference play.

For the NCAA Tournament, the Tide made 22 appearances and hope to make it 23.

As a team statistically they are doing well among the SEC. With three-point field goals made, they come in at first place with 270 points and have a three-point field goal percentage of 31.2%. Jaden Shacklelford leads the team in three-point shots made, scoring 89 points. For rebounds, the team ranks third and averages 40 per game. There are two leaders for the Tide in rebounds. Offensively Charles Bediako has 58 rebounds and defensively Shackelford caught 122 rebounds.

Out of all the Division I teams in the NCAA, Alabama ranks tenth for points per game with 80.5.

The SEC tournament will be held in Tampa this year and due to Alabama ranking No. 5 they are predicted to play Thursday, March 10 against the Game 1 winner. Depending on how well the Tide do at the tournament could boost their rankings in the NCAA tournament.

The odds for the game tonight

This game Wednesday is not a huge determining factor for the Crimson Tide if they win, however if the Aggies beat the Tide and perform well, they could have the NCAA looking into giving them a change to go to the tournament. The SEC tournament also would help the Aggies chances if they performed well and made it all the way to the SEC Championship.

For Wednesday’s game, ESPN’s matchup predictor favors the Tide, saying their chance of winning is 82.8% and the Aggies is 17.2%.

Shackelford leads his team in points scored as well as comes in fourth in the SEC. He averages 17 points per game and helps create plays for the team.

In the last game against South Carolina, Alabama won 90-71. Shackelford scored 21 points. His teammate Jahvon Quinerly helped out picking up 20 points and five assists. He also made four out five shots from the arch. Quinerly currently leads the team in assists averaging 4.4 assists per game.

Alabama is 14-6 this season when Jahvon Quinerly scores in double figures and 5-4 when he does not. Has scored 19 or more points in three of his last four games. Electric offensive player.

While the Tide rank in the top 10 in scoring in the nation, they also are in the bottom 10% for points allowed.

Defensively the Tide needs to improve to not allow as much scoring from their opponents.

For the Aggies, they rely on guard Quenton Jackson. He currently leads the team in points scored and steals. He scores on average 14 points per game and steals the ball on average 1.6 times per game.

They rank fourth in the nation for 10.4 steals per game.

While the Aggies have lost one more game than the Tide, they lost eight games in a row to ranked and unranked teams.

The only stat that they beat Alabama at is steals and if they perform well in causing Tide turnovers they could have a better chance at keeping the score close and possibly winning. Alabama ranks twelfth with seven steals on average per game in the SEC.