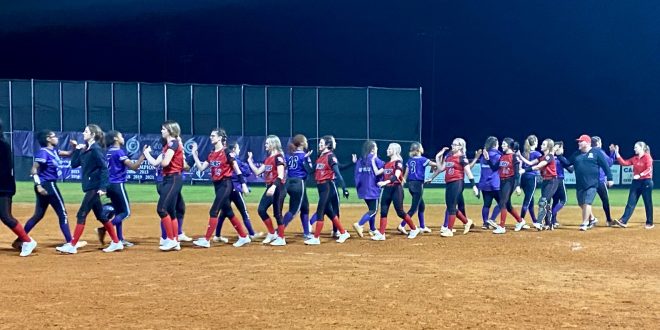 A Small Ball Showdown at Gainesville

The Gainesville Lady Hurricanes fell to the Dixie County Bears under the lights on Wednesday, March 2. The Bears short game and tactics led them to a 6-0 victory.

Though standout defensive players, center fielder Jayla Clark, and third basemen Braylin Cook had Kyra Hornsby’s back in the circle, it wasn’t nearly enough for the Bears’ offensive strategies.

Dixie County made their approach known as soon as Juliann Smith, leadoff hitter for the Bears, stepped in the box. She singled off of lefty pitcher Hornsby for the Lady Canes, setting up Madisyn Langford for a clutch sacrifice bunt. This gave Gainesville a sneak peek into the rest of the game. A preview of Dixie County’s aggressive baserunning and immediate small ball gave the Hurricanes insight towards a trying rally.

Jayla Clark gave the Lady Canes momentum heading into the bottom of every inning. Her energy at the plate and leadership in the field was contagious throughout the game. Before stepping into the box, she would radiate enthusiasm and motivate her team to bounce back from the previous scoreless innings. Her speediness on the base paths was necessary against the Bears who had six stolen bases to account for their six runs total.

Hornsby’s killer changeup took the Bears by storm until they began making the adjustment to a short game mindset. From there, they put four runs in a row on the scoreboard and pushed Gainesville’s corner infield to make key plays.

Dixie County lengthens their lead to 4-0 against Gainesville through four innings. pic.twitter.com/RSOvvoBnac

Fortunately, Braylin Cook gave the Lady Canes confidence each time a Bear would square around for a bunt. She made two crucial plays in the fifth inning to stop the runs coming in and showcased herself as a prime third basemen.

Also notable was right fielder, Aa’laysia Williams, who maintained hope at the top of the sixth and executed a standout double play. She caught a deep fly ball and then caught the runner at first base tagging for second. This gave Gainesville an upper hand as they attempted to cross the plate one last time.

The Lady Hurricanes will take on Northeast High School on Friday, March 4 at 4 p.m. The team had a lot of practice against small ball means and seem to be prepared for whatever comes their way from an opposing offense. Coming off of a tough loss, they will carry their speed and values into a long weekend of matchups.