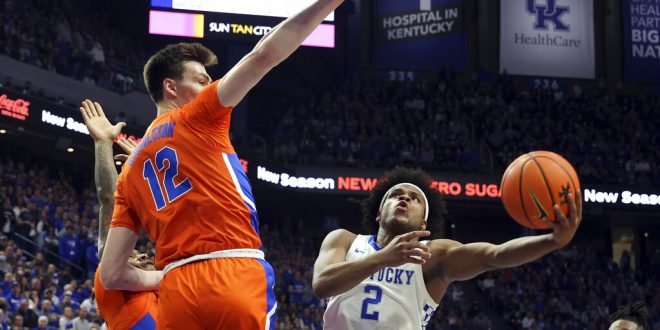 The Florida Gators and Kentucky Wildcats will go head-to-head on Saturday for their regular-season finale. The game will be played at Stephen C. O’Connell Center with tip-off at 2 p.m.

Florida enters the match 19-11 overall and 9-8 SEC, while Kentucky is 24-6 overall and 13-4 SEC. The Gators are feeling confident entering the game coming off of back-to-back wins over Georgia and Vanderbilt. The Wildcats are coming off of a loss to Arkansas and a win over Ole Miss.

Florida is looking to gain a spot in the NCAA Tournament. The Gators are sitting in the Next Four Out category by ESPN and look to make a statement by gaining an impressive win over the Wildcats. Saturday’s matchup provides the perfect opportunity for the Gators if they can manage the victory.

A few weeks back, the Gators shocked the world by taking down No. 2 Auburn 63-62 in a thriller which left fans storming onto Billy Donovan Court. The Gators will enter Saturday’s game hungry for a second major home win to top off what has been a rather average season.

In their last matchup from mid-February, Kentucky defeated Florida 78-57. The Wildcats followed behind forward Oscar Tshiebwe, who led the team with 27 points and 19 rebounds. Kellan Grady put up 15 points with Davion Mintz adding 11 for the Wildcats. Colin Castleton led the Gators with 18 points and seven rebounds. Brandon McKissic shot nine points for Florida.

The Gators fell short with a 45.1 field goal percentage while Kentucky shot at 46.3 percent. The Gators also struggled in completing threes at only 22.7 percent while the Wildcats completed 37 percent of threes.

Kentucky’s star Tshiebwe outplayed Castleton in their last match. Saturday’s game will be a fun one to watch as the two team leaders go head-to-head with an intense amount of pressure on their shoulders.

Can the Underdog Win?

In order to keep up with Kentucky’s electric offense, the Gators will need strong performances all around. Florida’s offensive talents certainly shine through Castleton, who averages 16.1 points and nine rebounds per game. Castleton has undoubtedly been the leader of the team throughout the season. He will need to provide his best performance on Saturday if the Gators want to win.

Florida Head Coach Mike White speaks on Castleton’s various contributions to the team after Florida’s win over Vanderbilt on Tuesday.

The Gators will also look to Tyree Appleby (11.4 ppg) and Phlandrous Fleming Jr. (10.9 ppg) to combat the Wildcats’ offensive efforts.

Fleming Jr. played a vital role in Florida’s win over Vanderbilt on Tuesday. With just 44 seconds remaining the Commodores held a 78-73 lead. Fleming Jr. blocked Scottie Pippen’s layup. Then, with only 6.3 seconds left on the clock, Fleming Jr. secured a three-point shot that sealed the deal for the Gators.

Fleming Jr. comments on the winning three-pointer he made against Vanderbilt.

Myreon Jones is also crucial for Florida, as he shoots 35 percent from the three, averaging just over nine points per game.

The Gators may have lost to the Wildcats at Rupp Arena, but now Florida has the home-court advantage. Florida fans are ready to rally for the Gators and are already lining up tents to camp out for the game as we speak.

Fleming Jr. explains how the Gators have faced many obstacles this season, but it has only made the team grow closer and better prepare for greater success.

While the Gators are currently known for shooting a high number of threes, they are not the most accurate. Florida hits just 32 percent from behind the arc. In their last matchup, Kentucky exceeded Florida in three-point shooting with Florida making only 22.7 percent of threes and Kentucky shooting at 37 percent.

Kentucky is currently No. 7 in the AP poll, sitting at No. 2 in the SEC. While Florida is currently No. 50 in the country, with a No. 32 offense and No. 79 defense. The Wildcats are undoubtedly the favorite, as ESPN has Kentucky favored by 71 percent. Kentucky holds an 80 percent chance of victory with Florida winning 60 percent of their games.

Despite the statistical advantage of the Wildcats and their explosive offense, the team struggles on the defensive end.

Mike Pratt comments on the current defensive struggles of Kentucky.

The poor defensive efforts as of recent may be a result of TyTy Washington and Sahvir Wheeler‘s absences due to injury. Without these two starters, the Wildcats’ defensive rhythm has been disrupted. Unfortunately for the Gators, Washington and Wheeler are back in action.

The SEC leaders in assist-to-turnover ratio:

The two combined for 30 points and 11 assists with 11-19 shooting and only three turnovers against Ole Miss. The Gators will take on a fully healthy Wildcat roster, but Florida is ready for the challenge.

Ellie is a second-year sports and media journalism major at the University of Florida.
@ellie_shreve
Previous No. 4 Duke hosts UNC in Coach K’s last game at Cameron Indoor
Next Gators Softball Hosts the Bubly Invitational