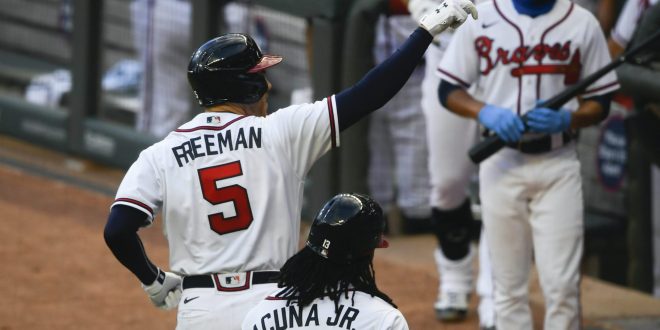 Braves All In for Olson: What about Freddie Freeman?

The Atlanta Braves are going all in on the newly acquired first baseman Matt Olson from the Oakland Athletics. This virtually puts an end to the Freddie Freeman era in Atlanta.

Jon Heyman, an MLB Network insider, suggested that the Braves went ahead with the trade before telling Freeman.

The Braves and Olson

On Tuesday, the Braves introduced Olson at a press conference. In addition, they broke down the action in a press release posted on Twitter earlier today.

On Monday, March 14, the news ultimately broke that the Braves traded for Olson from the Oakland Athletics per ESPN MLB Insider Jeff Passan. The Braves gave up four players for the newest addition.

BREAKING: Atlanta and Oakland are in agreement on a trade that will send star first baseman Matt Olson to the Braves, sources familiar with the deal tell ESPN.

Passan posted a follow-up tweet that discloses Olson’s new deal with the Braves. The Atlanta native will be given an eight-year $168 million deal.

Not only does Atlanta have a new 1B in Matt Olson, it’s going to have him for a long, long time. Olson and the Braves have agreed on an eight-year, $168 million contract extension, sources tell ESPN. Atlanta locks up the hometown kid two years before he was due to hit the market.

Furthermore, the Senior Writer for the Athletic, Ken Rosenthal, broke down the logistics of Olson’s eight-year deal with the Braves.

Deal covers six free-agent years. Arb salaries for next two years were not set. That’s why the FA years are an estimate of what they might have been. https://t.co/gEs0UEbqGH

Above all, the chances are incredibly high that the Braves will not retain first baseman Freddie Freeman. Braves fans are hoping for a Freeman return.

In Freeman’s career, the starting first baseman is averaging a .295 batting percentage, 271 homeruns and 941 RBIs.

According to an ESPN report, Freddie Freeman was not at the Braves spring training on Monday, March 14. In Feb. 2014, Freddie Freeman and the Atlanta Braves agreed to an eight-year contact $135 million contract per SBNation.com.

It is unclear where Freeman will end up. In a Sports Illustrated article, Freeman was previously open to returning to his home state of California where he could play for the Dodgers. In a MLB.com article, there is a possibility the Red Sox could pursue the free agent. Supposedly, the New York Yankees are also in the running as are the Los Angeles Dodgers.