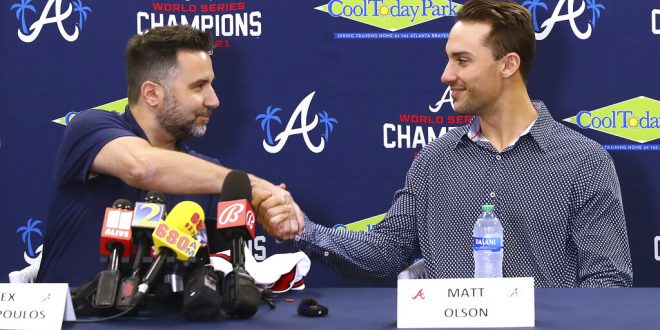 MLB is Back in Full Swing

Major League Baseball is officially back. There were questions as to whether there would be a MLB season after games were canceled and owners and players could not come to agreement on a new collective bargaining agreement.

Now, both parties have a new agreement in place and the free agency frenzy is back underway. Let’s go over the latest news, moves and additions around the league.

On March 10, MLB and the MLBPA finally agreed to a new deal that ended the lockout which lasted 99 days of negotiations. However, an offer was not made until about six weeks into these negotiations. Nonetheless, a new five-year deal is in place that will expire Dec. 1, 2026.

In addition, despite original statements from Commissioner Rob Manfred about canceling games, the league will play a full 162-game season. Here are some of the highlights of the new deal.

Since the official return of MLB, it’s been a crazy couple days of free agency signings and trades all around the league. Possibly the biggest trade is Matt Olson going from the Oakland Athletics to the Atlanta Braves. The trade is a big one for a couple reasons. Mainly, this all but confirms the end of the Freddie Freeman era in Atlanta, who are defending World Series Champions. Olson is a two-time Gold Glove winner and was an All-Star in 2021.

A lot of people won’t be happy, but Matt Olson was better than Freddie Freeman in 2021. This is a huge addition to the lineup! #Braves

The A’s received a slew prospects including OF Cristian Pache, C Shea Langeliers, SP Ryan Cusick and SP Joey Estes. Also for the Braves, they locked in Olson to a multiyear contract as he’ll be Atlanta’s first baseman for the foreseeable future. Olson and the Braves agreed to an eight-year, $168 million keeping him with Atlanta through at least the 2029 season.

Another big trade was between the Seattle Mariners and the Cincinnati Reds who continue to be sellers. Seattle acquired Jesse Winker and Eugenio Suarez from the Reds in exchange for Justin Dunn, Jake Fraley and Brandon Williamson. With the trade, it seems like the Mariners are all in having signed Cy Young winner Robbie Ray before the lockout.

Winker and Suarez have been strong and consistent presences in Cincinnati’s lineup. Winker, 28, and Suarez, 30, could be key cogs in Seattle’s lineup for years to come. The Mariners missed the playoffs by just two games last year and will look to make some noise with an improved roster and an expanded playoff field. Seattle has the longest playoff drought in all of North American sports and hope to change that this year.

Why does Jesse Winker make all the sense in the world for Seattle? He has destroyed right-handers the last two years. And in an AL West that’s particularly heavy with RHP, he looks awfully good in the middle of the Mariners’ lineup. Huge get as Seattle builds for the future. pic.twitter.com/KxvIYVbAal

The New York Mets continue to make moves to their roster. After adding Max Scherzer, Starling Marte and Mark Canha to the team, Steve Cohen and the Mets are committed to being contenders. This notion was confirmed after adding Chris Bassitt to their rotation. With arguably the best 1-2-3 punch in baseball, the Mets could have the league’s best rotation.

One final trade to go over is between the New York Yankees and Minnesota Twins. This was a five-player deal between the teams that sends 2015 AL MVP Josh Donaldson to New York. This will be his fifth team in six years.

The first big signing of the free agency restart is Carlos Rodon signing with the San Francisco Giants. Rodon signed a two-year, $44 million contract with the Giants joining a team that led the MLB with 107 wins but fell short to division rival Los Angeles Dodgers in the postseason. Rodon was fifth in the AL Cy Young voting finishing with 185 strikeouts over 132.2 innings pitched and a 13-5 record.

Another starting pitcher changing locations is Yusei Kikuchi who joins the Toronto Blue Jays on a three-year, $36 million contract. Kikuchi was an All-Star in 2021 posting a 7-9 record with 163 strikeouts over 157 innings to go along with a 4.41 ERA. Despite some poor outings later in the seasons, Kikuchi’s metrics are much better and joins a Blue Jays pitching staff that will have plenty of options after losing Robbie Ray to the Mariners.

Finally, there are some older players who landed contracts that look to have back-end surges in their careers. 41-year-old Nelson Cruz signed a one-year, $13 million deal with the Washington Nationals. Cruz has always been a reliable power hitter and spent the majority of his career with American League teams as the Nationals take advantage of the new universal DH rule.

Next up, 2013 NL MVP with the Pittsburgh Pirates, Andrew McCutchen, signed with the Milwaukee Brewers. Despite struggling with his batting average over the last couple seasons, McCutchen has continued to show flashes of power hitting and was able to get on base a decent rate, when he stayed healthy. With Jackie Bradley Jr. no longer with the Brewers and the DH spot, McCutchen could see a near-everyday role.

One other player worth mentioning is Clayton Kershaw. The future Hall-of-Famer returns to LA on a one-year contract worth up to $17 million. He is one of baseball’s all-time great pitchers at his peak. Although, his peak is behind him but has still been effective when on the field and off the injured list for the Dodgers. In 2021, he recorded a 3.55 ERA across 22 starts to go along with 144 strikeouts over 121.2 innings. In 2019, he was an All-Star with 189 strikeouts, 3.03 ERA and 178.1 innings pitched to go along with a 16-5 record. He’ll look to be a reliable starting option for LA behind Walker Buehler and potentially Trevor Bauer.

The lockout is over and players begin to report to their teams’ spring training sites. With the season set to begin April 7 and big name free agents still available, MLB is officially back.

Previous Braves All In for Olson: What about Freddie Freeman?
Next Miami Dolphins in NFL Free Agency