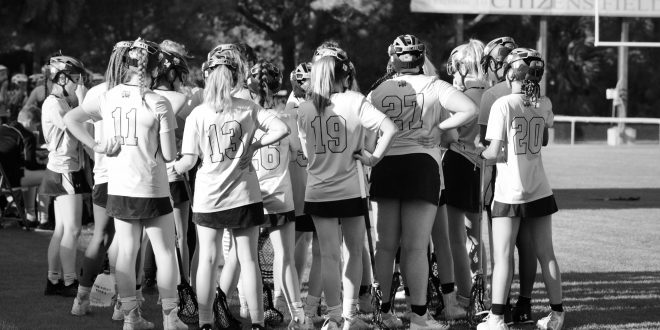 The Lady Bobcats gather around at the start of the game. Photograph by Ellie Shreve.

The Buchholz Girls and Boys Lacrosse teams both took on rival Oak Hall on Thursday night in back-to-back Non-District Matches at Citizens Field. The Lady Bobcats trailed the Eagles with a final score of 15-10.

The Oak Hall Eagles soared into the first half with an explosive offense that put up five points before the Bobcats could make their way to the net. Buchholz got on the board when junior Christine Cama weaved through the Eagles defenders and executed a clean shot into the goal.

Buchholz Junior #4 Christine Cama scores getting the Bobcats on the board.
5- Oak Hall
1- Buchholz pic.twitter.com/WBODHPFVEu

Buchholz fans erupted as Cama sparked the fight in her teammates. The Lady Bobcats were now down 5-1.

Soon after, sophomore Attacker, Havanna Vinson charged the ball into the net, scoring for the Bobcats who trailed 6-3.

The Lady Bobcats continued to put forth an aggressive effort on both ends of the field as the Eagles held on to the lead. Buchholz gained two more goals with Cama scoring to close the first half.

Buchholz Girls Lacrosse Head Coach Marissa Higgins advised her team at the half, “You have to put all of your soul into this game. Play for each other, play because you want to win”.

Cama closed the first with a goal for Buchholz and started the second with yet another. She continued to lead her teammates from her efforts at each face-off to her position at midfield.

Senior Attacker Marissa Chiarelli followed with another goal for the Bobcats, tightening the game 11-7.

#22 Marissa Chiarelli with the score for the Bobcats!
11- Oak Hall
7- Buchholz pic.twitter.com/1HDgNigAyZ

The girls continued to play throughout the second half with newfound energy and an impressive team effort.

In the last seven minutes of the game, the efforts of the Lady Bobcats truly shined. Cama was electric on the field as she made yet another impressive play for Buchholz, bringing the score to 13-8. The Bobcats gained two more goals as the second half neared its end.

As the clock ticks down, the Bobcats bring the heat. Another goal for Buchholz who trails 15-10 with 3:23 remaining in the game pic.twitter.com/d6d0gqUBVq

As the game buzzer sounded, the Lady Eagles stormed the field in triumph. With a final score of  15-10, the Bobcats put forth an aggressive effort but ultimately fell short.

The Buchholz Girls Lacrosse team is set to face the Eastside Rams on Monday with the starting face-off set for 5:30 p.m. The Bobcats are now 4-4 on the season.

Cama, the Buchholz Girls Lacrosse Captain and leading scorer of the match comments on the accomplishments and effort the team brought to the field.

Coach Higgins reflects on the effort of the team against Oak Hall and their focus moving forward.

Buchholz Girls Lacrosse Head Coach Marissa Higgins explains what she’s proudest of from the team’s efforts against Oak Hall as well as the focus of the team moving forward. @ThePrepZone @ESPNGainesville pic.twitter.com/1oPXnUVXU8