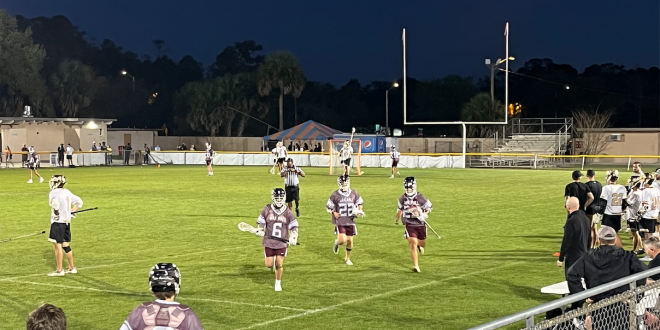 The Oak Hall Eagles boys lacrosse team dismantled the Buchholz Bobcats with ease on Thursday night. The Eagles’ high-powered offense led them to a 15-3 victory against their hometown rivals. Freshman Pierce Montes, senior Michael Moreschi and senior Joshua Raymond each recorded a hat trick with three goals on the night. Senior Cade Balogh and junior Luke Stabb both chipped in with two goals each. Freshman Tommy Weber and sophomore Wes Clark also got on the board with one goal each.

Starting Off Hot and Never Looking Back

Entering the game with a 9-2 record, the Eagles took control of the game early on in the evening. Montes and Moreschi each recorded a goal within the first six minutes of the game. The team played equally aggressive on the defensive end, limiting the Bobcats’ shots on goal and offensive opportunities. Moreschi credited the team’s effort on defense for opening up fast-break opportunities on the offensive end.

“It started with our defense. We got stops early, which transferred to our transition game,” Moreschi said. “We pushed them a lot, we got fast breaks, which then led to a lot of goals.”

One quarter down, and the Eagles lead 4-0. Superb offense (as demonstrated in this goal by Cade Balogh) and strong defense has cracked this game open for the Eagles. The Eagles will start the second quarter with a one-minute slashing penalty, but otherwise a near-perfect start. pic.twitter.com/MNhADyRcfg

The Eagles kept their run going in the second quarter. Despite picking up a slashing penalty and allowing a Bobcats goal at the start of the quarter, they responded with five unanswered goals. By the end of the first half, Montes, Raymond and Moreschi had all recorded two goals. Montes credited the team’s gameplan for both his impressive offensive outing and the Eagles’ dominant half as a whole.

“I was just going to play as hard as I could and back my teammates,” “I knew that if I did that, the goals… would show up.”

After giving up a goal at the start of the quarter, the Eagles responded with four goals of their own to add on to their 8-1 lead. Plays like these show how the Eagles have physically dominated the Bobcats on nearly every play from the faceoff to the whistle. pic.twitter.com/DATWk0wyD5

An Eventful Second Half

Following halftime, the Eagles picked up right where they left off. Montes recorded his third goal of the game within the first three minutes of the third quarter. However, as the quarter progressed, some of the players and coaches got a little chippy at times. There were multiple instances of verbal back-and-forths, but it never got too out of hand. Eagles Head Coach Jonathan Montes attributed the banter to the excitement surrounding a rivalry game like this.

“This is a rivalry game. Any time you play in a rivalry game, there’s emotion,” “You’re dealing with the past, the present and the future.”

Raymond also noted how these back-and-forths are natural in high-stakes matchups like these.

“There’s going to be points where people disagree with each other, but we just hash it out,” Raymond said.

By the fourth quarter, the Eagles had taken full control of the game. Raymond and Moreschi each recorded the goals that clinched their hat tricks in the closing minutes of the game. By the time the final horn sounded, the Eagles had already began celebrating their hard-fought win on the sideline. As they exited the field, it was all smiles for the now 10-2 Eagles.

The Eagles are coming off a hectic slate of their schedule which saw them play five games in eight days. However, they will now get nearly three weeks of rest with their next game being set for April 6. Upon their return to the field, they will visit the Ponte Vedra Sharks in what will be their second-to-last regular-season game. With an impressive record and a talented roster behind them, it is safe to say the Eagles will be a force to be reckoned with as we approach the postseason.

Jack Meyer is a first-year student at the University of Florida. He is majoring in Journalism and specializing in Sports and Media.
@jackmeyerespn
Previous Buchholz Girls Lacrosse Falls to Oak Hall
Next P.K. Yonge Secures a 3-0 Victory Against Chiefland