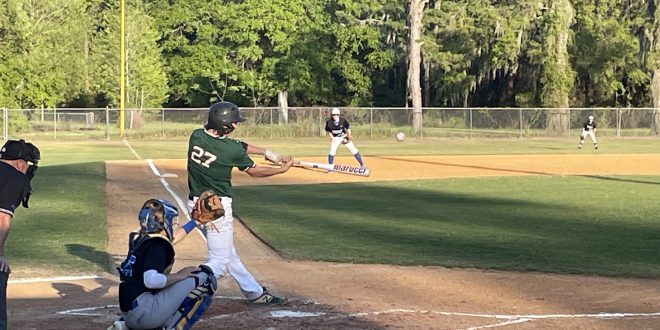 The Eastside Rams hosted the Newberry Panthers Thursday night in a battle between two 3-3 teams. Eastside was coming off a 17-2 loss to Bucholz on Monday. They had won the two prior games before losing to Bucholz. Newberry came into this one riding a 20-0 thrashing against Wildwood Wednesday night. The Panthers rode great performances on the mound from sophomore, Braxton Brady and senior, Mason Tomcheck to a 10-2 victory over the Rams.

Balanced Efforts in the Start

Both teams started the first inning with high energy and strong competitiveness. All Newberry batters made solid hits with no strikeouts. The Panthers also managed to steal three bases. Even so, Eastside’s organized defensive efforts held the Panthers to only one run. Meanwhile, Junior Miles Archer hit a long ball that caused two consecutive runs for the Rams. By the end of the first inning, the Rams were leading 2-1.

The Rams make a solid defensive stop to cause the 3rd out and prevent the Panthers from extending the lead at end of top of the first inning. The Panthers lead 1-0 after the the top of the first. @RowdyEHSRams @EHSramsbaseball @ESPNGainesville @ThePrepZone @GNVpreps pic.twitter.com/7CjuwkZwTO

Newberry continued to have hard, long hits that challenged Eastside’s defense. The Panthers scored three runs and took the lead of the game. Archer, who was the catcher for the Rams, caused two crucial defensive outs which prevented the Panthers from extending the lead. Offensively, the Rams started to scramble. Sophomore Jayden McBride got as far as the second base, but the Rams failed to get any runs on the scoreboard. The Panthers led 4-2 after the second inning.

Eastside struggled mightily offensively after the second inning. After the start of the third frame, the Rams had just one hit in the fifth and another in the seventh. Brady sat down his last seven batters and In his final inning of work in the fourth, he struck out the side in order. Overall, Brady had a great night. He gave up three hits in four innings, allowing just two runs and striking out seven.

On the other hand, Zachary Barger struggled on the bump. He had a very tough fourth inning as he gave up two hits and hit two batters in the frame. Barger finished his night throwing four innings while giving up seven hits and eight runs, seven of which were earned. He walked three and hit two more.

Tomcheck came in for the Panthers in the fifth. He gave up one hit and struck out two in the inning. Eastside also brought in a new arm after the fourth. Junior, Thomas Shay took the mound for the Rams and was firing bullets. He had a solid fifth frame striking out the first batter he faced and gave up one hit. After the fifth inning, Newberry was leading 8-2.

The Panthers lead 8-2 after the end of the 5th inning. The Rams continue to struggle defensively, remaining scoreless for 4 consecutive innings. @RowdyEHSRams @EHSramsbaseball @RAWE_RECRUITS @GNVpreps @ThePrepZone

Strictly Strikeouts for the Rams

With a new pitcher in the game for both teams, the momentum of the game completely shifted but not in favor of the Rams. The wheels fell off in the top of the 6th, the Rams having 2 errors that provoked Newberry to increase their lead by two. The Rams, now down 10-2, with just two at-bats left. Eastside fails to respond in the bottom of the 6th, getting no hits and three straight strikeouts.

Eastside pitcher, Thomas, responds to adversity in the final inning by throwing three straight strikeouts to get the Panthers off the field for good. Second up for the Rams, Amari Johnson hits a dinger and makes it to second. The next two hitters are struck out by Panthers pitcher Mason Tomcheck. Game over, Rams lose 10-2.

Abby Ogier caught up with head coach Sean Dobbs and asked “What part of the game would you say has the most room for improvement?” In summary, Coach Dobbs thinks their at-bats need the most improvement. He said, “Our last 9 outs were strikeouts and that just can’t happen.”

What’s Next for the Rams and the Panthers

Heading into spring break with a loss, the Rams record has now fallen to 3-4. It will be difficult for the Rams to improve their record as they will have to face the Bucholz Bobcats again on 29 of March at 7 p.m. after their blowout loss from Monday. As for the Panthers, they will play against the West Port Wolf Pack on 29 of March at 6:30 p.m. The Panthers will be looking for revenge against the Wolf Pack after an unfortunate loss of 6-5 from their first matchup on February 24.