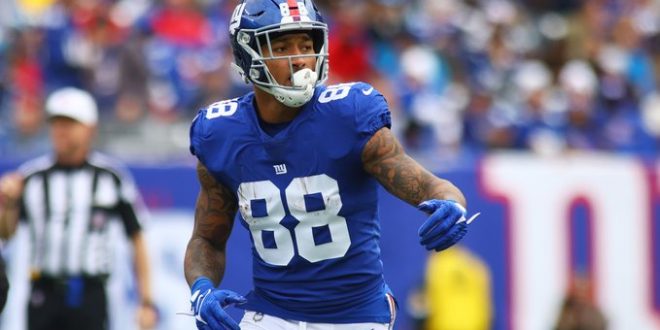 Former Giants tight end Evan Engram lines up in a game during the 2021 season. Engram signed a one-year deal with the Jaguars. Credits to @B/R Gridiron on Twitter.

The former New York Giants tight end was drawn to the Jaguars with the hire of Doug Pederson at head coach.

“Obviously playing against him twice a year the last four years when he was in Philly and his resume and pedigree, using the tight end position, and some of the talent that he’s developed was a big part of my decision,” Engram said.

Pederson was also fond of Trevor Lawrence and his ability to lead the team and play ball. Young quarterbacks are making a splash across the league and Lawrence and Engram could make a large impact together.

“I know he went through a lot last year and for him to be able to be a leader here and make an impact that he did, that stands out to me,” Engram said. “That was another big decision, playing with a young quarterback that I can come in and relate to and build a relationship with and transfer that relationship to success on the field.”

Coach Pederson sold the tight end on the versatility of the Jaguars offense, creating a picture with Engram being a key part in it. Pederson plans for the tight ends to be a security blanket for the quarterback while also making explosive plays.

“That’s how I view myself and then that’s the vision he has for myself in this offense,” Engram said.

The previous first-round draft pick signed a one-year deal for $9 million. The decision to do so stemmed from him wanting to work hard, showcase his abilities and then possibly stay for a longer term.

During his time with the Giants, Engram had 2,828 receiving yards with 262 caught passes and 16 touchdowns. He moved on from the Giants in hopes of being able to show his true abilities in Jacksonville, something he felt he did not get the opportunity to do back in New York.

Scherff is known to be a leader among his team on and off the field, leading by example and showing younger guys the correct way of doing things at 100%.

Just like Engram, a big part of Scherff deciding to come to Jacksonville was Coach Pederson and Lawrence.

“I know a couple of guys that played for Coach Doug and they said nothing but great things about him,” Scherff said. “And you know, blocking for Trevor. Watching his tape, he’s an outstanding quarterback and we’re excited for the opportunity.”

Scherff plans on contributing to the Jaguars just as he was doing back in Washington, while also prioritizing himself and doing the right thing as a leader.

“If I’m not doing the right thing, then I can’t help them,” Scherff said.

The five-time pro bowler agrees to a three-year contract with the Jaguars that is worth $45 million. $30 million of that is guaranteed and he received a $15 million signing bonus.

During his time in Washington, Scherff had 89 career starts.

Previous Florida vs. Alabama Baseball Preview
Next Tennessee Scorches Longwood in Round one.