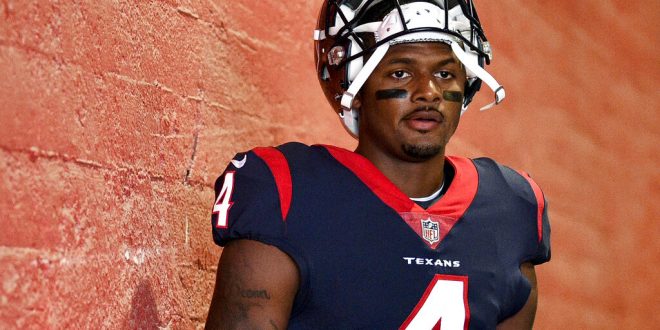 FILE - In this Aug. 25, 2018, file photo, Houston Texans quarterback Deshaun Watson prepares to take the field prior to an NFL preseason football game against the Los Angeles Rams in Los Angeles. Watson has been sued by four more women who accuse him of sexual assault and harassments. The lawsuits were filed Thursday night, March 18, 2021, hours after the NFL said it was investigating earlier allegations by three massage therapists who said the quarterback sexually assaulted them during massages. (AP Photo/Kelvin Kuo, File)

The Packers trade Davante Adams while Deshaun Watson heads to the NFC. Watson is seemingly heading to the NFC South with up to three teams looking to sign him. The Packers traded Adams to the Las Vegas Raiders for two draft picks.

While Arron Rodgers returns to the packers in near MVP form, ready to lead his team, the Packers look for new personnel. Adams was traded to the Las Vegas Raiders on Thursday for a first and second-round pick in this year’s draft. Sources have said that Adams had become upset and frustrated in Green Bay and was ready for change.

The Raiders have promised 29-year-old Adams a five-year contract that averages $25.5 million a year with $67.5 million guaranteed. Adams’ trade ends the most successful and record-breaking quarterback – wide receiver connection in Packers history. However the Packers are now in scramble mode to look for a new weapon for Rodgers on the field to make up for the touches and targets Adam was given. Because the Packers now have their primary receiver traded and two others, Marquez Valdez-Scantling and Equanimeous St. Brown, on the free-agent list.

Davante Adams’ future looks bright in the city of lights. Reuniting with his college quarterback, Derek Carr, Adams will bring some unseen chemistry for the raiders. This also gives Carr another primary target other than Darren Waller.

Deshaun Watson is rumored to be looking to the NFC South. The race for Deshaun Watson at QB is shrinking fast. After the Carolina Panthers were informed on Thursday that they are out of the running, the only teams left are the Saints and the Atlanta Falcons. The Falcons plan to ship out Matt Ryan and replace him with a scrambling threat QB to complete their offense. While star players like Kyle Pitts and Cordarrelle Patterson for the Falcons could use a quarterback that is a bit younger and hungrier than Matt Ryan.

Then Pitts, represented by the same agent as Watson, tweeted out, ” It’s about to get Scary in Atlanta” and then quickly deleted it, which has led some to believe he is a sure thing for the Falcons.

The saints are trying very hard to get Deshaun Watson by creating cap space. Therefore The Saints restructured the contracts of quarterback Taysom Hill defensive backs Bradley Roby and Malcolm Jenkins and linebacker Demario Davis to leave the team with $29.9 million in cap space. This freed up salary for the Saints to pick up Watson and give him the contract he’s looking for.