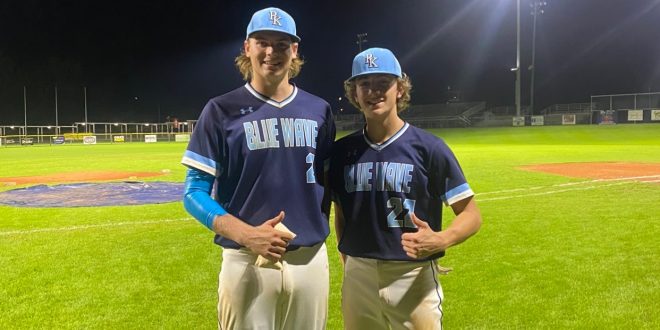 By Madi Walker and Bianca Papa

The P.K. Yonge Blue Waves take home another win on their home turf against the Chiefland Indians Thursday evening. This brings P.K. Yonge’s record to 5-2 and Chiefland to 4-6 for their seasons so far.

Covering the P.K. Yonge Blue Wave versus the Chiefland Indians today with @MadiWalkerr. Currently the bottom of the 1st inning with P.K. Yonge at the plate. @pkyongedrs pic.twitter.com/kuVEhsIbXZ

PK Yonges Drew Dawson was a standout player in the ball game against the Chiefland Indians to help them seal a 3-0 win. Showing off his talents as a two-way, Dawson, the Daytona State Commit, especially flaunted his pitching ability throughout all seven innings. The top of the first inning consisted of striking out two of Chieflands batters, looking to fasten two of the three out immediately.

As the night progressed, the top of the second inning approached, and Dawson showcased his four pitches once again. Dawson began by striking out two of Chieflands batters swinging with his go-to pitch for the night; his slider.

Dawson’s take on the pitch:

P.K. Yonge maintained dominance against Chiefland the rest of the night, and Dawson remained a crowd favorite every time he returned to the mound. Dawson kept his spirits high throughout the game and battled the Chieflands line-up throughout all seven innings. A stud of the night, the Daytona Commit soon reached his 105 pitch-count right before the third out of the final inning. Leading his team to victory, Dawson walked off the diamond with a high head and a cheering crowd.

Bottom of the 5th inning, P.K. Yonge in the lead against Chiefland Indians with a score of 3-0.

A quick start to the ball game, in the bottom of the first inning, P.K. Yonge’s second hitter, Aidan Mansfield, struck a base hit single to get the ball rolling, literally. Next at the plate, Chieflands pitcher Seth Campbell faced Drew Dawson, the Blue Waves standout two-way, who hit an RBI double. This put the Blue Waves at a lead of 1-0 to begin the game.

The bottom of the third inning approaches, with Campbell still on the mound. Mansfield gives the fans deja-vu when found on first base with another base hit single. Third, at the plate, Lane Sparkman, left fielder for the Blue Waves, faced two strikes to begin his at-bat. Sparkman was then thrown a fastball launching it over the Chieflands outfield’s heads to secure a two-run homerun, now bringing P.K. Yonge up by three.

Lane Sparkman talks about how he did not foresee the pitch received from Seth Campbell:

The Blue Waves kept up this high intensity against the Indians throughout the rest of the game, securing a 3-0 win.

After securing a win against Chiefland, P.K.Yonge’s record for the season is now 5-2. The Blue Waves will face Covenant Christian Academy in their next game, March 21, in Houma, Louisiana.

A 2022-2023 sophomore at the University of Florida, Madison is studying Journalism, Sports and Media, with hopes to one day become a reporter and journalist. Madison graduated from IMG Academy in 2021, where she competed as a student-athlete running Track and Field. Madison loves all things sports and all things Gators!
@@madiwalkerr
Previous Three Players Record Hat Trick in Rivalry Win for Oak Hall Boys Lax
Next Oak Hall Tennis Stays In Command Over Seven Rivers From Start to Finish 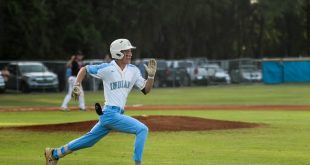 An Offensive Sweep At Chiefland