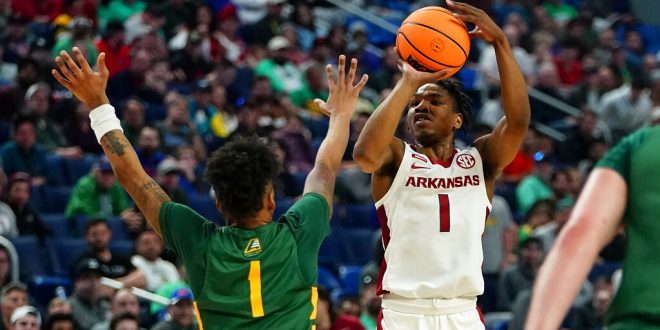 Arkansas guard JD Notae shoots against Vermont guard Aaron Deloney, left, during the second half of a college basketball game in the first round of the NCAA men's tournament Thursday, March 17, 2022, in Buffalo, N.Y. (AP Photo/Frank Franklin II)

The No. 4 seed Arkansas Razorbacks held on for a 75-71 win over No. 13 seed Vermont to avoid getting upset like others did on day one of March Madness. Stanley Umude led all players with 21 points for the Razorbacks, and JD Notae chipped in for 17, all of which came in the second half. Ryan Davis and Ben Shengu led the America East champion Vermont Catamounts.

With the first-round win, Arkansas advances to face No. 12 seed New Mexico State, who knocked off No. 5 seed UConn on Thursday.

The Catamounts led for the first ten minutes of the first half, thanks to some consistent three-point shooting and hustle. Razorbacks star guard JD Notae found himself in foul trouble, committing two early fouls, and had to sit out for a lot of the first half.

Backup Davonte Davis stepped up in his place, though, sinking 10 of the Razorbacks’ 34 first-half points. When the Razorbacks took the lead with 10:13 remaining in the first half, they would never give it back, despite a late push from Vermont. Through one half, though, Arkansas led Vermont 34-27.

Eric Musselman’s team was able to drown out the noise of a day that saw utter chaos and get the job done against Vermont. Despite getting outscored by the Catamounts 44-41 in the second half, the Razorbacks seemed one step ahead the whole way.

Arkansas took its biggest lead of the game with 4:26 remaining in the game when they went up 67-58. The Catamounts made it a game down the stretch, though. With just over 12 seconds left in the game, Ben Shengu put up a contested three-pointer to cut their deficit to 73-71.

DON'T COUNT VERMONT OUT YET pic.twitter.com/94izSr2i8z

On the next possession, the Catamounts nearly turned the ball over to have a chance to tie it. But they couldn’t capitalize, fouling Notae instead, who sunk both of his free throws to ice the game.

Breaking Down the Stats

Vermont converted just 10-of-17 from the free-throw line, while Arkansas made 20-of-25.

Vermont is out after coming into the tournament winning 22 of its last 23 games. Arkansas will advance to face New Mexico State on Saturday, hoping to replicate some of the success that propelled them to an Elite Eight finish in last year’s tournament.

I'm a third-year student at the University of Florida passionate about storytelling and sportswriting. My goal is to work in communications for a professional sports team after I graduate.
Previous Friday’s Matchups In Women’s NCAA Tournament
Next Newberry Baseball Downs Eastside 10-2