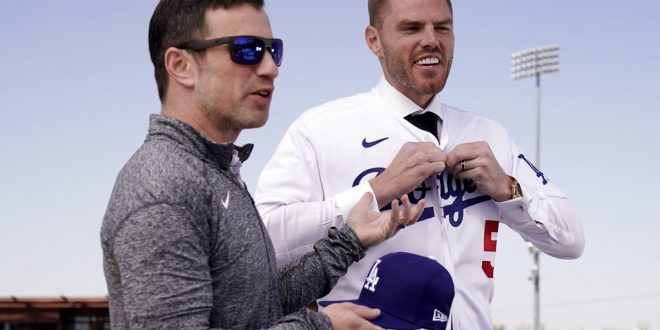 Five Time All-Star and World Series Champion, Freddie Freeman, is heading to the City of Angels.

Saying Goodbye to a Great

A tough pillow to swallow for the Atlanta Braves, Freeman is an organizational greats. Certainly a player who was perceived to retire a Brave, the trade sent not only the organization, but all of MLB in a frenzy.

The @Dodgers lineup just got even scarier. pic.twitter.com/TxvOfcIDly

The blockbuster trade came as a surprise to Freeman, as he was open and willing to stay in Atlanta for the longevity of his career.

While the decision to leave Atlanta wasn’t an easy one, he understood that it was the best call for his career. Surely, there is no denying that the six year, $162 million contract will pad the checkbook. Additionally, being from Southern California, the move to LA will give his family the ability to see him play.

With this trade, the Dodgers are primed to make another postseason run. Surely a roster loaded with All-Stars, the addition of Freeman starts the whispering of the phrase, “superteam.”

As history has shown, not all “superteams” reach there end goal of a championship, but that’s the beauty of sports. Players have to show up and perform day in and day out, and work towards the success, not just ride glamorous coat tails of talent. While Freeman understands how talented his new teammates are, he knows that they still have to take the diamond every night, and perform at the high level they are accustomed to.

The move to acquire Freeman certainly puts the Dodgers on the short list of World Series favorites. Just like there inner city counterpart, The Los Angeles Rams, the Dodgers have taken an aggressive free agency approach. Simply going “all in”, time can only tell how the cards will fall.