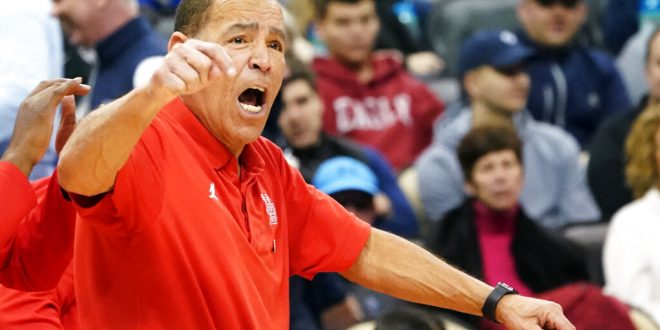 Houston head coach Kelvin Sampson yells to his team as they play against Illinois during the second half of a college basketball game in the second round of the NCAA tournament, Sunday, March 20, 2022, in Pittsburgh. Houston won 68-53 to advance to the Sweet 16. (AP Photo/Keith Srakocic)

With the Sweet 16 beginning Thursday, the NCAA Men’s Tournament has been madness. With upsets and highlight-worthy plays, the tournament has provided excitement to its viewers. Notably, there were six upsets in the second round alone.

Some of the top seeds have struggled, such as Baylor, while others have shows exactly why they were considered the best teams in the country.

Despite the top four seeds in the West region making the Sweet 16 round, it was not an easy path. All four games were won by less than 10 points each. Significantly, top-seeded Gonzaga struggled against the No. 9 seed Memphis, winning by only four points.

Surely, the East has two of the biggest stories of the tournament. Foremost, it has this year’s underdog team, Saint Peter’s.

The No. 15 Peacocks have been on a roll through the first two rounds. Emphatically, the team brought down No. 2 Kentucky in the biggest shocker of the first round and then beat No. 7 Murray St. in its next game.

Certainly, No. 8 North Carolina has caught fire at the right moment and is playing like a No. 1 seed. Impressively, it demolished Marquette by 32 points and then took down No. 1 Baylor in an overtime thriller.

North Carolina will have its hands full when it takes on Johnny Juzang and No. 4 UCLA while Saints Peter’s has the tough task of playing against No. 3 Purdue.

The Midwest has no shortage of shock factor either.

No. 10 Miami has been hot, and their latest victim was an 18-point blowout against No. 2 Auburn. Also, No. 11 Iowa State has been breaking hearts, producing two upsets in two games. Remarkably, they defeated No. 6 LSU and No. 3 Wisconsin in back-to-back weeks.

Those two will face off while No. 1 Kansas and No. 4 Providence go at it to round out the Midwest.

Additionally, The teams in the South have also looked strong. Particularly, No. 2 Villanova and No. 5 Houston have both secured double digit margins of victory in both of their games.

Strikingly, No. 11 Michigan has clearly came to play and Juwan Howard and the Wolverines took down No. 6 Colorado State and No. 3 Tennessee on their way to the Sweet 16.

Michigan will take on Villanova while Houston has to play No. 1 Arizona.

How the Teams Got Here

Despite being the No. 2 seed in the West, coach Mike Krzyzewski knows how special it is to make the Sweet 16 round. Solidly, Duke blew through Cal State Fullerton but faced a challenge in Tom Izzo and Michigan State. In a close game, the Blue Devils pulled away in the end and grabbed a nine-point victory. Krzyzewski was quick to point out they won because of his team’s personalities, not just talent.

Houston head coach Kelvin Sampson iterated a similar view to Krzyzewski. Assuredly, he said the team’s success has come from the culture in Houston, not the talent of the team. Markedly, the Cougars have been rolling through the rounds of 64 and 32. The team beat UAB by 14 and Illinois by 15 on the way to the Sweet 16 round.

While many of the teams in the tournament have chances to showcase their talent, Saint Peters’ head coach Shaheen Holloway said his team usually lacks this opportunity. While teams like Duke and Houston are known for brining in talented recruits, the Peacocks are not.

It was supposed to be the first victory for Kentucky. Instead, Holloway’s team proved they belong. Primarily, he knows the team can compete with the Blue Bloods and is happy to see his players get the chance to show what they’ve got.

Whether these teams are heavy favorites or massive underdogs, one thing is for sure. They are going to play hard to try to prove themselves as some of the top teams in the country. The Sweet 16 kicks off Thursday at 7:09 with Gonzaga vs. Arkansas and wraps up with Iowa State vs Miami at 9:59 on Thursday.