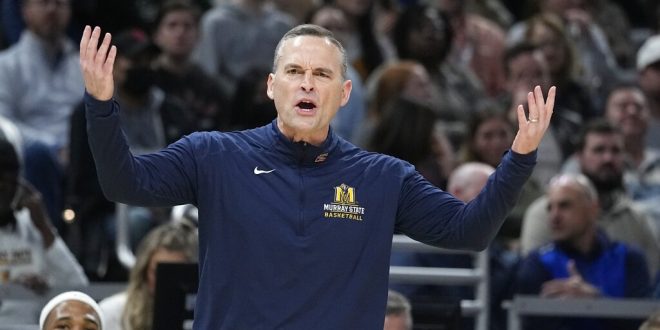 Murray State head coach Matt McMahon argues a call during the first half of a college basketball game against Saint Peter's in the second round of the NCAA tournament, Saturday, March 19, 2022, in Indianapolis. (AP Photo/Darron Cummings)

The LSU Tigers have named Matt McMahon as the new men’s basketball coach on Monday.

A Winning Standard of Performance.

The specific details of McMahon’s contract are unknown at this time. However, there are reports of a multi-year deal.

Point being, McMahon has job security to get through the next few years.

With experience building a strong program at Murray State, the Tigers are in need of a firm foundation. According to LSUsports.net, McMahon has been coaching since 2002 where he served as an assistant coach for Appalachian State.

McMahon is eager to join the SEC to coach the Tigers who went 22-12 in the 2021-22 regular season. The Tigers lost in the first round of March Madness to 11th-ranked Iowa State.

“I’m excited to join the best athletic department – and the most iconic brand – in all of college sports. This is a once-in-a-lifetime opportunity for me, and I cannot wait to get to work.”

The Tennessee native, who served as the head coach of the Racers since 2015, proved that he has the ability to turn a program around.

The Impact on the Tigers

As for the Tigers, they are in need of a savior following the recent NCAA allegations involved with their former head coach Will Wade earlier this month.

Wade was fired right before the Tigers entered the NCAA tournament. This was his second time being involved in possible NCAA allegations according to this Sports Illustrated article.

With the change of a new head coach, there has been a loss in recruits.  According to a sports illustrated article, there have been three recruits to de-commit from LSU. The article states that Devin Ree, Julian Phillips and Marvel Allen have decommitted. There are expected to be more losses for the Tigers basketball program in the future.

McMahon and his family made an appearance at the Tigers Women’s basketball game on Monday.

Welcome to the PMAC, Coach! https://t.co/cWMWKmDT8I