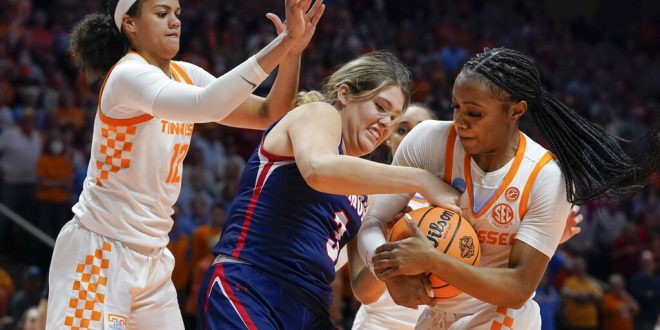 Belmont's Madison Bartley (3) battles for the ball with Tennessee's Rae Burrell (12) and Jordan Walker, right, in the second half of a women's college basketball game in the second round of the NCAA tournament Monday, March 21, 2022, in Knoxville, Tenn. (AP Photo/Mark Humphrey)

Belmont University almost made program history again last night against the Lady Vols in the second round of the NCAA women’s basketball tournament as they faced a remarkable Tennessee team.

Until last year, Belmont had never won a NCAA tournament first-round game. Last night, they had the opportunity to make it two in a row. Tennessee, on the other hand, has won 127 tournament games. They have had 34 Sweet 16 appearances, 18 Final Four appearances and won eight national championships, making them one of the most- if not the most- successful women’s college basketball programs.

But the underdog Belmont held their own in Knoxville, Tennessee up until the final 18 seconds. A 3-pointer from freshman Sara Puckett gave Tennessee the momentum they needed to push on. And they did. The Lady Vols ended the Belmont Bruins’ season with a final score of 70-67.

In 1968, Betty Wiseman, 23, took initiative in starting a women’s basketball program at Belmont University. More than five decades later, Wiseman could be seen in the front row cheering on her team as they erased a 14-point deficit.

Unfortunately for Wiseman, this celebration would soon come to an end. Despite their loss, Belmont can walk out with their heads held high as they did something that most teams couldn’t do.

The Lady Vols were down 64-66 late in the game until Sara Puckett took back the lead with a 3-pointer.

From there, Tennessee held on until the clock read zero.

Tennessee was led by Alexus Dye, who scored 20 points and grabbed 11 rebounds. Tamari Key put up 18 points, followed by Puckett with 12.

After the 12th-seeded Bruins took down fifth-seeded Oregon 73-70 in overtime in the first round, they never really lost their momentum and drive. They proved themselves as a respectable contender in women’s basketball.

What is next for the Lady Vols and the Bruins?

The Lady Vols will advance to their 35th regional semifinal in program history. They will play Louisville.

This loss is nothing to be ashamed of. The Belmont Bruins will be back.