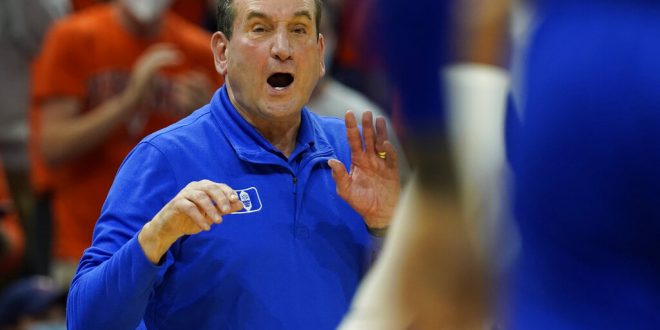 Coach Mike Krzyzewski and the Blue Devils continue to dance their way into the Elite Eight. Duke and Texas Tech battled it out last night as each team gave the other a run for their money. Duke eventually came out victorious, 78-73.

Coach K’s 100th NCAA Tournament win did not come too swiftly. The Blue Devils had a rough start as they trailed the Red Raiders for most of the first half.

With 8:17 left in the half, Paolo Banchero’s two successful free throws allowed for Duke to tie the game, 22-22. Soon after Jeremy Roach’s jumper gave the Blue Devils their first and only lead of the first half.

Texas Tech’s Kevin Obanor’s three point jumper brought his team back to being the front runner with 6:35 remaining.

The Red Raiders finished the first half with a four-point lead against the Blue Devils, 33-29.

Duke stepped up their offense in the second half to put up a fight against Texas Tech.

The Red Raiders continued to lead the way until AJ Griffin completed a three point jumper with an assist by Banchero, tying the game for the second time at 47-47 with 13:10 left in the second half.

From there, the two teams continued back and forth. When one team took the lead, the other returned and took it back.

With 2:57 left in the game, Banchero’s three point jumper put the Blue Devils up by one-point. They held off the Red Raiders for the rest of the game.

Duke’s ability to improve their play in the second half helped to clench them the win and move on to the Elite Eight, ending Texas Tech’s season.

Coach K is Not Done Yet

Duke’s win against Texas Tech in the Sweet Sixteen means that Coach K’s retirement is postponed for at least one more game. He praised his team and opponents after the emotional win.

The team showed their offensive abilities after they shot 71% in the second half against the No. 1 defense in the country.

Banchero, who lead the team with 22 points, described the game as one he played to win.

“There’s never been a bigger moment than this,” Banchero said. “I don’t know about these guys, but I’ve never played in a basketball game like that.”

The Duke Blue Devils will play the Arkansas Razorbacks in the Elite Eight on Saturday at around 8:50 p.m.