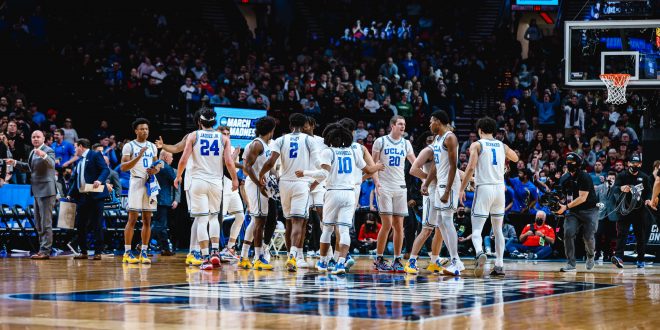 No. 4 seeded UCLA Bruins matchup against the No. 8 seed UNC Tar Heels in Philadelphia for the third round of the 2022 NCAA Men’s Basketball Tournament.

Bout of the Blue Bloods

UCLA enters tonight’s matchup with a dominant record of 27-7. They beat 13 seed Akron in the first round, before dealing with five seed St. Mary’s in the round of 32. The California squad ranks eighth overall according to Kenpom, with an adjusted efficiency of +25.10. The Bruins have adjusted offensive and defensive efficiencies in the top 15, but their adjusted tempo is 65.4, making them one of the slower teams in all of college basketball.

The bruins are sparked by Guard trio of Jamie Jaquez Jr., Johnny Juzang, and Tyger Campbell, making them a constant threat on offense. Jaquez left last week’s game with a sprained ankle, but is expected to play tonight. Having him on the floor is a huge boost for the Pac-12 school.

The slow game tempo also means better control of the ball. That discipline could be the difference between both teams as UNC struggles to force turnovers.

One day prior to UCLA's Sweet 16 matchup against North Carolina, the Bruins spent Thursday at Wells Fargo Center for a mid-day press conference and practice.

UNC rides into the sweet sixteen matchup with a 26-9 record. The Carolina squad beat Big East foe, Marquette, in the round of 64 and then took down one seeded Baylor in a game that showed their talent.

The Tar Heels expressed a lot of inconsistency throughout the regular season, but things look like they are kicking into gear at the perfect time. Led by Forward Armando Bacot (16.4pts, 12.5 rebounds), the Tar Heels are averaging 83.4 points per game, almost 20 more than UCLA. With a cast of supporting shooters, North Carolina can get HOT from deep. Their defense isn’t amazing, but they might simply outscore their opponents.

This is the 30th appearance in the sweet sixteen for the Tar Heels and the 21st for the Bruins, so experience at this stage comes on both sides. Carolina is 9-4 as a No. 8 seed in the NCAA Tournament, including 1-1 in the Sweet 16, but don’t expect the bruins to collapse easily.

According to ESPN’s Basketball Power Index, the Bruins have a 68.9% chance to win, with North Carolina getting a 31.1% chance.

Both squads look hungrier than ever, so this one should be good.