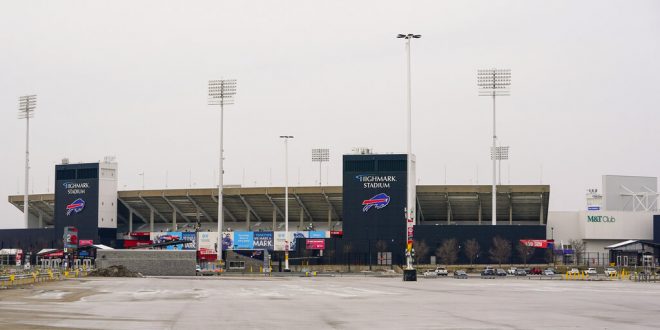 FILE - Highmark Stadium sits under cloudy skies, Friday, March 18, 2022, in Orchard Park, N.Y. State and county taxpayers will be asked to commit $850 million in public funds toward construction of the Buffalo Bills' new stadium, which has a state-projected price tag of $1.35 billion, a person familiar with the the plan told The Associated Press on Monday, March 28, 2022.(AP Photo/Frank Franklin II, File)

Bill Belichick, Bruce Arians, Dan Campbell and Mike McCarthy are not in. pic.twitter.com/O8BcwFLGE8

A major topic of discussion was new Browns quarterback Watson, who faces 22 civil lawsuits and possible punishment from the NFL despite not facing criminal charges for sexual assault. The Houston Texans traded the former first-round pick to the Browns for a 2022, 2023 and 2024 first-round pick, a 2024 third-round pick and a 2024 fourth-round pick. Additionally, Houston gave Cleveland a 2024 fifth-round pick.

According to Goodell, the league is looking at Watson’s situation seriously despite the criminal charges being dropped.

Furthermore, Goodell said discipline for Watson is still on the table as the NFL’s personal conduct policy expands past criminal charges.

Additionally, Goodell explained that a commissioner’s exempt would have most likely happened had the criminal proceedings gone any further.

As far as a timetable is concerned, Goodell said discipline is based on when the facts the come out.

Roger Goodell said “there’s no timetable” on a decision of any potential discipline for Browns’ QB Deshaun Watson. “We will seek to get to the bottom of the facts,” Goodell said.

Diversity in the NFL

This week, the NFL made two moves with the goal of increasing diversity in the league. To start, the NFL announced the creation of an “Diversity Advisory Committee” which will evaluate the league’s diversity and hiring processes mainly for senior-level positions. Furthermore, six outside experts will make up the new committee and will provide the league with recommendations in certain scenarios.

Statement from the NFL on commitment to increasing diversity among ownership:pic.twitter.com/dNe0FNhE2O

This move comes nearly two months after ex-Dolphins head coach Brian Flores filed a lawsuit against the NFL and three of its teams.

According to Goodell, the league spent the most time discussing diversity during the meetings.

On Tuesday, the NFL announced a new rule which requires all 32 teams to hire at least one female or minority to an offensive position.

“The coach must work closely with the head coach and the offensive staff, with the goal of increasing minority participation in the pool of offensive coaches that eventually produces the most sought-after candidates for head-coaching positions,” ESPN’s Kevin Seifert said.

Furthermore, Goodell said the specifics of the rule have to do with the fact that the league does not have many minority offensive coordinators.

New stadium on the way for Buffalo

On Monday, the Buffalo Bills announced plans for a new $1.4 billion stadium in Orchid Park, N.Y. across the street from their current home Highmark Stadium. The new plans include a 30-year commitment for the Bills to stay in Buffalo.

A statement from Terry and Kim Pegula on the new Bills stadium project. pic.twitter.com/eOy970NM7T

Overall, Goodell explained pleasure with the deal after expressing the need for a new stadium for Buffalo.

Three entities will fund the $1.4 billion stadium. The State of New York will provide $600 million, Erie County will provide $250 million and the Bills and the NFL will provide $550 million. Evan Anstey of WIVB reports that 60.7% of the deal comes from public funding.

Goodell called the deal a “public-private partnership” due to how the stadium is funded.

Additionally, Goodell praised New York governor Kathy Hochul for her leadership while the deal was being negotiated.

You have questions. We have answers.

Here's what you need to know about the new Bills stadium project. ⬇️

The Bills aim to open their new home at the start of the 2026 season.