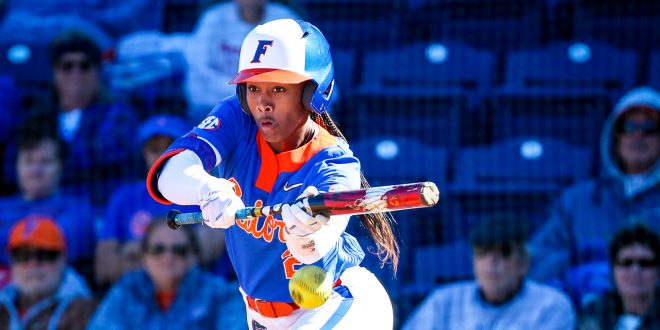 The No. 7 Florida Gators face the No. 22 UCF Knights March 30 at Katie Seashole Pressly Stadium.

The Gators have a leg up over UCF win 22 wins and six losses against the Knights. Florida won the most recent game Feb. 27, 12-11. In the Knights classic, fifth-year second baseman Hannah Adams, senior Charla Echols and sophomore Katie Kistler dominated on the offense. Kistler had three hits, making for a season high.

Gators On The Plate

Florida poses a tough threat to UCF on the offense.

UCF In The Ring

Senior Gianna Mancha is a powerhouse pitcher for the Knights and may serve as a major inconvenience for Florida. Mancha made a season-high 10 strikeouts against USF March 27 in seven innings pitched and is ranked No. 36 in the nation in strikeouts with 112.

The game can be streamed on SEC Network+.

Previous Roger Goodell talks Deshaun Watson and more
Next Peterson happy to be home, has high props for Napier