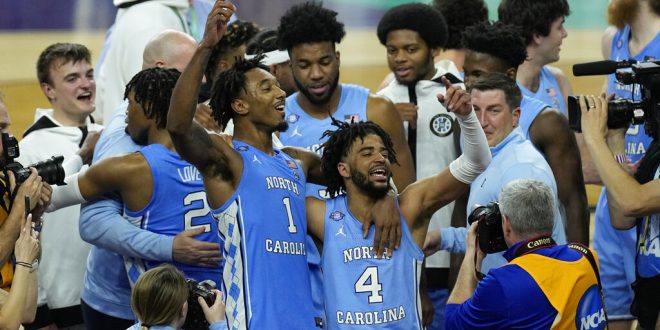 After taking down Duke in an emotional Final Four matchup, the North Carolina Tar Heels are poised to win their first national championship since 2017. The Tar Heels look to become the first eight seed to win a championship since Villanova in 1985. On their way to the National Championship, UNC beat nine seed Marquette, one seed Baylor, four seed UCLA, 15 seed Saint Peter’s and two seed Duke. Now, the focus is on the one seed Kansas Jayhawks.

North Carolina looks ahead past Duke

Ahead of Monday’s matchup, UNC head coach Hubert Davis spoke with the media about the upcoming title game. Although emotions are high after the rivalry win, Davis wants to focus on the task at hand: beating Kansas.

Davis recalls his time as a player at UNC, falling to Kansas in the Final Four

In 1991, Hubert Davis played for the Tar Heels and faced Kansas in the Final Four, losing to the Jayhawks 79-73. Davis says he watches the game at least once a year, knowing how close he came to cutting down the nets as a player. Oddly enough, Duke went on to win the Final Four in 1991, beating Kansas in the title game.

Davis wants to focus on the players

With a journey like the Tar Heels’, Davis wants to make sure the players know this is about them. Davis advises the players to soak up every minute of being in New Orleans for the Final Four. Davis is happy to be along for the ride, hoping to guide his team to another Final Four victory.

Behind forward Armando Bacot and guard Caleb Love, UNC will face the high-powered Jayhawks. Kansas has a dynamic duo of guards in Ochai Agbaji and Christian Braun, who the Tar Heels must contain to come out victorious.