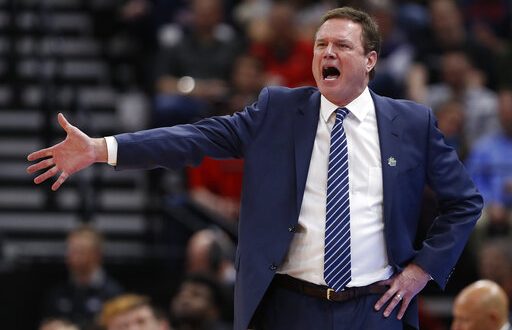 FILE - In this March 21, 2019, file photo, Kansas head coach Bill Self reacts in the first half during a first round men's college basketball game against Northeastern in the NCAA Tournament in Salt Lake City. A person familiar with the situation says the University of Kansas received a notice of allegations from the NCAA on Monday, Sept. 23, 2019, that alleges significant violations within its storied men's basketball program. The person spoke to The Associated Press on condition of anonymity because neither the NCAA nor the school had announced the notice, which was first reported by Yahoo Sports. That initial report, citing unnamed sources, said the notice included three Level 1 violations tied primarily to recruiting, lack of institutional control and a responsibility charge leveled against Hall of Fame coach Self. (AP Photo/Jeff Swinger, File)

For the first time since 2012, Kansas is back in the National Championship. Since then, KU has been playing while being investigated for committing five Level I NCAA violations in 2019. Despite the dark cloud hovering over the program, the team is preparing to compete for their fourth title. Head coach Bill Self spoke about Kansas’ journey back to the title game.

In 2019, the NCAA hit Kansas with five Level I violations in September of 2019. Significantly, there were charges of “lack of institutional control and head coach responsibility” against Bill Self. The charges stem from allegations that individuals connected to Adidas acted as boosters and gave money to the families of Kansas prospect recruits. Moreover, the program did not properly monitor any alleged wrongdoing by Adidas. Thus, the NCAA implemented the lack of institutional control charges.

Kansas has however defended itself from allegations and says the individuals were acting on their own and not on behalf of the university. Because of the severity of the violations, it could lead to postseason bans and suspensions and scholarship reductions.

Heading into the Villanova matchup, Coach Self was asked about the anticipated penalties. He said, “Well, I can’t comment on anything that’s ongoing with the case about anything, but I do hope that the end is soon.” He added, “I believe we’re getting closer. And I know that no one probably from any party has wanted this to go as long as it has. But I do believe that the end is soon.”

As Self and the Jayhawks prepare for the big dance in New Orleans, he spoke in a presser and detailed the road back to the big game.

Self has been the head coach at Kansas since 2003, and since then has made three title appearances. Ultimately, 2012 is the year the Hawks took home the trophy under Self. In the presser, he spoke on what it meant to return to the big stage.

Furthermore, he discussed the pressure of winning the title Monday night and addressed the program falling short of winning more titles.

Monday night Kansas will look to accomplish its fourth title while holding North Carolina off from winning their seventh. The matchup returns to New Orleans since 2012 at the Caesars Superdome. Tip-off is set for 9:20 p.m.