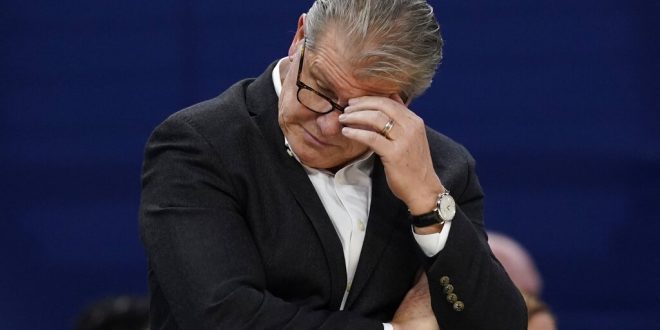 UConn head coach Geno Auriemma reacts during the second half of a college basketball game in the final round of the Women's Final Four NCAA tournament Sunday, April 3, 2022, in Minneapolis. (AP Photo/Charlie Neibergall)

UConn women’s basketball coach, Geno Auriemma is in his thirty-seventh season with the program. Prior to Auriemma taking over the program, they only had one winning season. But, under him, UConn has 11 national titles, 21 Final Four appearances, six perfect seasons and 53 conference championships.

The program’s overall record through the 2021-2022 season is 1,240-312. The Huskies have reached the Final Four every year since 2008. Auriemma still holds the record for women’s basketball coaches with the most National Championships sitting at 11.

Sophomore guard, Paige Bueckers gave it everything she had in last night’s championship game, but it just wasn’t enough. Bueckers missed a few months during the regular season due to knee surgery but returned in time for tournament play.

South Carolina’s game plan was to make it hard for Buecker’s to make shots and force someone else to step up and make shots. Bucker’s played 39 minutes and scored 14 points in the championship game. South Carolina outrebounded them 49-24.

Auriemma credits Dawn Staley and South Carolina for being the best team throughout the whole season.

The Huskies struggled on both ends of the floor, offense and defensively. UConn only scored 49 points, the second fewest UConn has ever scored in an NCAA tournament game. Auriemma discusses how South Carolina was way more physical and way more aggressive.