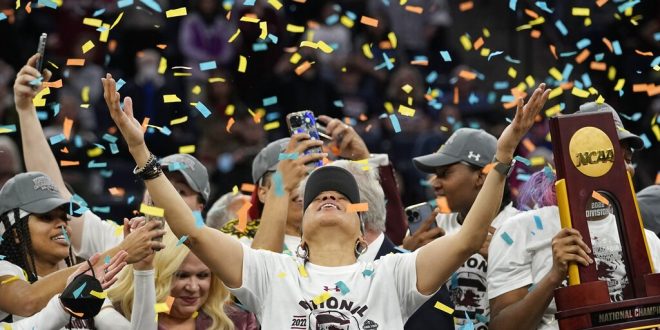 South Carolina came out HOT to start the first half. They were up 13-2 six minutes into the first quarter. Then, the Huskies were able to cut the point deficit down to nine points, 32-23 with two minutes left in the second quarter.

South Carolina leads UConn 35-27 at the half. They have not yet trailed.

The last team to win the national championship game without ever trailing was UConn over Syracuse in 2016.

The Gamecocks kept a pretty comfortable lead going into the second half; however, Paige Bueckers, aka Paige Buckets, kept the huskies not too far away. After a corner 3 from UConn guard Evina Westbrook, the Huskies topped off a 10-0 run to bring them within six points; 43-37. The Gamecocks were up nine going into the final quarter. The Huskies opened the fourth with a mid-range jumper from forward Aaliyah Edwards. The Gamecocks continued their momentum throughout the rest of the game and walked away with a victory.

Although the Huskies were unable to come out with a victory, Paige Bueckers had an excellent game. She dropped 14 points, six rebounds, two assists, one block and one steal. She was getting the job done on both ends of the ball. South Carolina’s senior guard, Destini Henderson was dominating against the Huskies. Henderson scored 26 points, two rebounds, four assists and three steals. She was a force on the court, to say the least. Finally, South Carolina’s junior forward Aliyah Boston stepped up big in the championship game. Boston scored 11 points, 16 rebounds, three assists and three blocks. Boston and Henderson definitely paved the way for the Gamecock’s victory.

In 2021, the Gamecocks faced off against Stanford in a Final Four matchup. Boston had a dominant performance with 11 points, 16 rebounds, 1 steal and 5 blocks. However, she missed the final shot to send the Gamecocks to the championship game. The final score was 66-65. After a great season, it all came to an end after one shot.

Aliyah Boston will bounce back from the missed shot, coach Staley says.

She reflected on her own heart break at UVA in the NCAA Tournament, also against Stanford.#WFinalFour | @wachfox pic.twitter.com/c4E3cUiMh1

Boston never gave up. In the following year, she was able to lead her team back to the Final Four and close out a historic year with a national championship, and was named NCAA Player of the Year. “…Aliyah is a great player. She will come back better and stronger,” said Dawn Staley, her head coach. Boston definitely came back better and stronger and it showed in the biggest game of all.