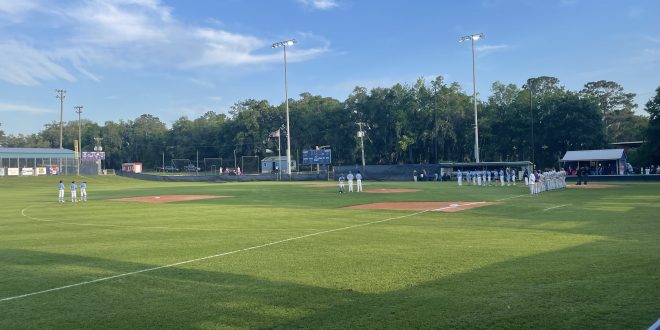 Warfare on the Mound

The first three innings of the game were dominated by the pitchers. Right-hander Colton Kelly got the start for the Hurricanes, and Drew Dawson started for the Blue Wave. Through three innings, Kelly struck out six batters, allowed only one hit, and gave up no runs. Kelly’s powerful fastball and precise off-speed pitches kept batters from making solid contact all night.

Colton Kelly is dealing for the Hurricanes. No runs allowed through 3 innings. Score remains 0-0. pic.twitter.com/QuvY7SCxzI

“His performance on the mound was consistent with what he’s done for us all year,” he said. “He gets a lot of swings and misses as well as a lot of weak contact. We feel very confident when he’s out there.”

Drew Dawson also had a solid night on the mound for P.K. Yonge. Dawson gave up only one hit through three innings and kept Gainesville scoreless. The beginning of the game was governed by both teams’ defense.

After three scoreless innings, Gainesville finally scored a run in the top of the fourth inning. Kelly led off the inning with a double to centerfield. He went on to score after consecutive infield ground balls by Nate Kemph and Josh Morison.

In the bottom of the fourth, with Kelly still on the mound, P.K. Yonge began its offensive tirade. After an error by Jack Herrbold in left field, Dawson reached second to start things off for the Blue Wave. With only one out, a single by James Sparkman and a walk for Jacob Pridgen loaded the bases for P.K. Yonge. Kelly struck out the next batter, but a single into center field by P.K. Yonge scored two runs, giving the Blue Wave a 2-1 lead.

Things heated up in the fifth inning. Dawson stayed on the rubber to start the top of the inning. Andrew Pickles quickly got things going for Gainesville, ripping a double into center field. After Tyler Guarino was hit by a pitch, Carter Jones stepped up to the plate for the Canes. Jones lined a ball into left field, and the P.K. Yonge outfielder was unable to stop the ball after attempting a diving catch. Jones ran all the way to third, scoring both runners and reclaiming the lead for Gainesville.

The flurry was not yet over for the Hurricanes. Herrbold beat out a ground ball for an infield single, scoring Jones from third. The very next at-bat, Kelly doubled into left field, bringing Herrbold around for another Gainesville run. P.K. Yonge pulled Dawson off the mound once Gainesville had taken a 5-2 lead, and Gage Riley ended the inning for the Blue Wave.

Monster inning for the Hurricanes. A triple by Carter Jones and a double by Colton Kelly gives Gainesville a 5-2 lead through 5 1/2 innings. pic.twitter.com/J4qzyhDyFn

“We’re very good offensively as a team,” Malphurs said. “We had a lot of confidence all night that we would get to Dawson. Even when balls weren’t falling early in the game there was never any panic. Our guys knew if we stayed true to our approach that we would have success… I think what you saw in the fith was our guys being rewarded for a disciplined and sound approach throughout the game.”

Kelly shut down the P.K. Yonge offense in the bottom fifth and Riley gave up no runs to Gainesville in the top of the sixth. After a double and an infield hit for the Blue Wave in the bottom of the sixth, Tyler Guarino took over for Kelly on the mound and kept P.K Yonge from scoring. Through 5.1 innings pitched, Kelly totaled eight strikeouts and gave up five hits and two runs (no runs earned).

Gainesville scored two more runs in the seventh inning by way of a single from Herrbold, a walk by Kelly and then a two-RBI double by Kemph. Guarino closed things out for Gainesville in the seventh, ending the night with 1.2 IP, three strikeouts and no runs. The final score was a 8-2 win by the Hurricanes.

Following this win, Gainesville holds a 6-7 record. The Hurricanes’ next game is a non-district away game against the Vanguard Knights on April 7 at 6 pm. The Canes are roughly at the halfway point of their season, as rainouts canceled many earlier scheduled games.

“It took getting some games under our belt, but our guys are figuring things out and I’m excited to see how they finish this year” Malphurs said. “The goal at this point is to get in a position to contend for a district title and get a playoff birth. We have a good group and I think our best baseball is yet to come.”