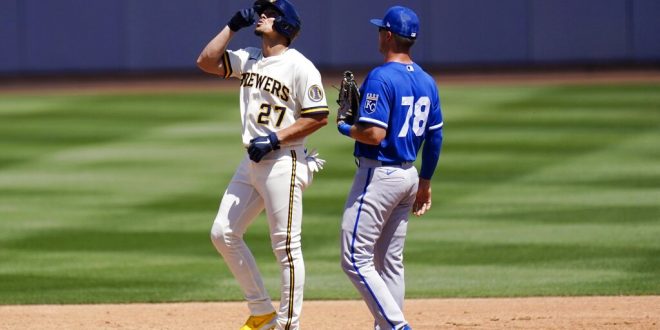 Two teams in NL Central made the playoffs in 2021, and with an expanded field there is a possibility that the division can have the same success in 2022. After a lockout threatened this year’s MLB season, its 30 teams will play a full 162-game slate.

The Brewers won the NL Central last season with a 95-67 record. The team’s year finished with a loss to the Atlanta Braves in the NLDS.

Craig Counsell’s squad can expect to be propelled by its pitching staff. Closer Josh Hader‘s 34 saves and 1.23 ERA were enough to earn NL Reliever of the Year honors in 2021. Starter Corbin Burnes is the reigning NL Cy Young Award winner, having tossed his way to a 2.43 ERA.

Milwaukee will also expect contributions from new additions Hunter Renfroe and Andrew McCutchen. Renfroe mashed 31 homers last season while playing for the San Francisco Giants. McCutchen, the 2013 NL MVP, will provide leadership to the team while it hopes to take advantage of the new universal DH rules.

It will also hope for continued success from shortstop Willy Adames, who hit 20 home runs and batted .285 in 2021. The Brewers will also need star outfielder Christian Yelich to bounce back in a big way. The 2018 NL MVP has batted under .250 each of the last two seasons after seven straight years batting over .280. Yelich has not made an all-star game since finishing second in MVP voting in 2019.

The reigning division champions will play half of the season without catcher Pedro Severino. The former Baltimore Oriole was suspended for 80 games after testing positive for performance enhancing drugs. He batted .435 in the Spring.

Which player had the most impressive Brewers camp?@DimTillard provides the answer in Episode 2 of Brewers Unfiltered.

Members of the Cardinals believe the team can win the World Series this fall. Last year’s team lost the NL Wild Card Game to the Los Angeles Dodgers.

St. Louis finished second with a 90-72 record before firing manager Mike Shildt. It replaced him by promoting bench coach Oliver Marmol, who at 35 is the youngest manager in the MLB.

He is younger, in fact, than former franchise cornerstone Albert Pujols, who returned to the team this season. Pujols signed a one-year deal with the Cardinals after spending his last 10 seasons in Southern California. He will start for the team on Opening Day, and he is expected to retire this fall with a litany of accolades to his name.

Marmol is also younger than franchise stalwart Adam Wainwright, who has played for the team since 2005. Wainwright won 17 games last season and had an ERA of 3.05, providing remarkable consistency to the team’s starting rotation. He is expected to be the team’s starter against the Pirates on Opening Day.

That rotation will be without Jack Flaherty to start the year. Flaherty will begin 2022 on the injured list due to a lingering shoulder injury. The 26-year-old finished fourth in CY Young voting in 2019. Closer Alex Reyes is also dealing with a shoulder injury and will not be ready to begin the season.

We LOVE to see it! pic.twitter.com/r3G3svtPNg

The Cubs are in the midst of a rebuild. The 2016 World Series Champions dealt cornerstones Javier Baez, Anthony Rizzo and 2016 NL MVP Kris Bryant at the trade deadline last season.

Catcher Willson Contreras remains on the team, but he may not be wearing the Cubs red and blue uniforms by the fall.

The North Siders’ offseason additions could make them a sleeper in the NL Central. Former Yankees outfielder and top prospect Clint Frazier will hope for a resurgence after concussion issues derailed his 2021 season. Starter Marcus Stroman joined the team after spending his last three years with the New York Mets.

Chicago will also look to veteran Kyle Hendricks for rotation help. The longtime Cub was the league’s ERA leader in 2016, and he had a down year by his standards last season. His ERA climbed to 4.77 from 2.88 in the lockout shortened 2020 season.

After joining the team from the Oakland Athletics, first baseman Frank Schwindel became a bright spot for the Cubs. He batted .326 and finished sixth in rookie of the year voting in 2021. He continued his production in the Spring, batting .389 in eight games.

The Cubs, who will hope to push for a Wild Card spot, will open the season against the Brewers on Thursday.

The Reds finished last season with a record of 83-79. However, the team lost its batting leader and its ERA leader this offseason.

Outfielder Nick Castellanos, who batted .309, is now a Philadelphia Phillie. Wade Miley, who threw a no-hitter last season, is a Chicago Cub.

Cincinnati will look to two of its young arms for help in the rotation. Former second overall pick Hunter Greene made the team’s Opening Day roster. The 22-year-old, along with fellow rookie starter Nick Lodolo, will be expected to eat up a lot of innings for the Reds. Both players tore up AA in 2021, with Lodolo’s 1.84 ERA barely edging Greene’s 1.98 mark.

On the other side of the field, former MVP Joey Votto‘s production will be key for the Reds. The 38-year-old smacked 36 home runs last season. Cincinnati will also turn to former Florida Gator Jonathan India, the reigning NL rookie of the year.

Bottom of the Barrel

For the Pirates, the 2022 season will likely be used for development. Twenty-seven-year-old Bryan Reynolds was a bright spot for the Pirates, who finished with an abysmal 61-101 record in 2021.

The outfielder followed up an all-star season with a strong Spring, batting .361 over 12 games.

Shortstop Oneil Cruz, who batted .333 during Spring Training, will begin the season in AAA. When he inevitably arrives in the majors, he will join third baseman Ke’Bryan Hayes in the infield. The 25-year-old finished sixth in rookie of the year voting in 2020 before batting .257 last year.

Starter Mitch Keller is also expected to make strides in his game after throwing well enough to earn a 2.92 ERA through four starts in Spring Training.

The Pirates have not made the playoffs since 2015 and haven’t had a winning record since 2018.