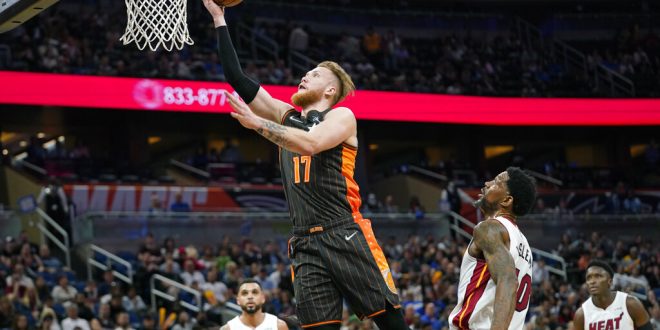 Orlando Magic's Ignas Brazdeikis (17) makes a shot after getting between Miami Heat's Udonis Haslem, right, and Mychal Mulder (12) during the second half of an NBA basketball game, Sunday, April 10, 2022, in Orlando, Fla. (AP Photo/John Raoux)

In the final game in Amway Center this season, the Magic provided nothing short of a show for their fans. In what was their annual Fan Appreciation Day, Orlando put on a clinic as they hosted Miami Sunday night. Regardless of the team walking away with a 125-111 win, the Sunshine State rivalry matchup was the end to their 2021-2022 season. In the dominant performance, the Magic matched a franchise record and saw season bests from multiple players.

Surely, Orlando took advantage of Miami’s decision to rest most of their starting rotation. While Victor Oladipo put on a dominant performance with 40 points in his triumphant return from injury, it wouldn’t hold up as Orlando had an offensive parade of their own.

Significantly, Orlando tied an all-time franchise record after banking in 23 three-pointers. The record of 23 was set on January 13, 2009 in Sacramento. Sunday’s performance also marked the fifth time in franchise history Orlando has scored over 20 three-pointers in a game.

Furthermore, the Magic saw seven of its players score in double-figures. The pack was led by Mo Bamba’s 21 points and 10 rebounds. The third-year veteran’s points came at a 63.6% field goal percentage. Guard R.J. Hampton followed suit, matching Bamba’s 21 points and contributing six rebounds. Hampton’s performance was his career best as he also added five assists for the night.

Notably, reserve guard Devin Cannady, who prior to the matchup agreed to a contract with the Magic that allowed him to play Sunday, came off the bench and scored a season-high of 15.

Moreover, Orlando’s offensive flurry went beyond scoring and also came in the form of assists. Markelle Fultz mustered up nearly half of the team’s 33 assists in the night. Fultz went for a career high 15 assists, with a season average of 5.5.

Looking ahead, the Heat await a rendezvous with the winner of the Eastern Conference play-in-tournament champion. Miami finished the regular season with the best record in the East. The Heat’s slate of protentional first round opponent includes Brooklyn, Cleveland, Atlanta, or Charlotte. The NBA playoffs will begin on April 16.

As for Orlando, their offseason officially begins. The team finished the 2021-2022 regular season with the second worse record in the league. Despite finishing 22-60, the Magic will see if their next big win comes during the NBA’s Draft Lottery. Last year, the Magic landed the fifth pick and drafted Jalen Suggs out of Gonzaga. The Lottery will take place on May 17.