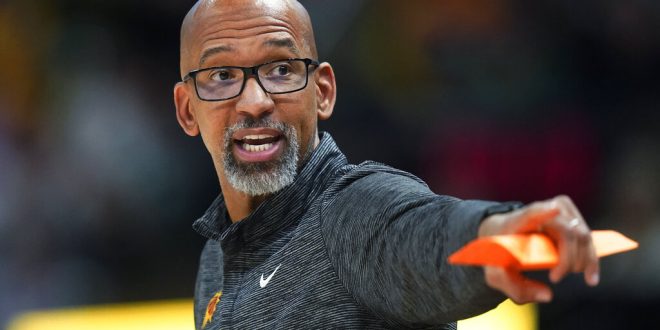 Phoenix Suns coach Monty Williams directs the team during the second half of an NBA basketball game against the Utah Jazz on Friday, April 8, 2022, in Salt Lake City. (AP Photo/Rick Bowmer)

Phoenix Suns head coach Monty Williams won the Michael H. Goldberg NBCA Coach of The Year award for the 2021-2022 season Tuesday. It is his second consecutive year picking up the accolade.

The head coach with the most excellence throughout the season receives the award, introduced in 2017. All 30 coaches in the National Basketball Coaches Association vote on the award. They cannot vote for themselves.

Leading the NBA, Williams helped the Suns pick up a 64-18 record this season.

Thoughts On The Win

“I am thrilled and overwhelmed to be recognized by my peers and receive the Michael H. Goldberg Coach of the Year Award from the NBCA,” Williams said. “The coaches in our league sacrifice so much to serve their teams, and there are so many outstanding coaches deserving of this honor.”

“Monty Williams is extremely deserving of this Award and the recognition that comes with it from his coaching peers,” he said. “Monty embodies the same high levels of integrity and excellence that Michael displayed every day of his life.”

He has a passion and dedication toward the game and the league. Former Executive Director Michael H. Goldberg, to whom set the name of the award, has these qualities.

Williams will go up against Memphis Grizzlies head coach Taylor Jenkins and Miami Heat head coach Erik Spoelstra among others for the Red Auerbach Trophy.

Though Chris Paul is out due to a thumb injury, Deandre Ayton faces contract issues and Suns owner Robert Sarver is under investigation for racism and misogyny, the team flourished this season.

Moreover, it is ranked fifth in offense ratings at 114.2, third in defense rating at 106.8 and first in net rating at 7.5. Furthermore, it finished fifth in defensive rebounds, averaging 35.5 per game.

Later in the playoffs, the NBA’s Head Coach of The Year Award and the Red Auerbach trophy winners will be announced.

With its opponent to be announced Friday, Phoenix begins its playoff run at Footprint Center Sunday and Tuesday.