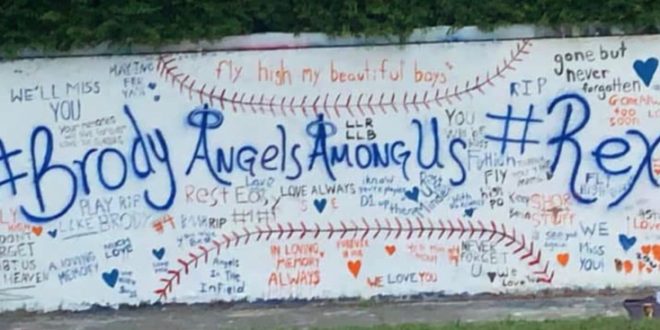 It’s bigger than baseball on Thursday night as Buchholz and Gainesville High School put their rivalry aside to come together and honor the Rex and Brody Foundation.

On May 4, 2021, Rex and Brody Reinhart were the victims of a murder-suicide. The Reinhart boys were killed by their own father. Rex was just 14 years old while Brody was just 11.

The Gainesville community gathered on May 17, 2021 to honor the boys. The memorial service was held at the Florida Ballpark to recognize the love the boys shared for the game of baseball.

For the past seven years, Buchholz and Gainesville have come together to support causes bigger than baseball. With a variety of previous charities, this year’s cause is in the hearts of the team, the coaches and the Gainesville community.

“Gainesville/Buchholz is a huge rivalry in all sports and has been for decades. But what we’re doing tonight is really cool in terms of coming together as a community. I’m so glad we’re able to be a part of the game honoring Rex, Brody and their Foundation. I’m happy we’re able to show our support for the Prince family tonight. We’ve had some memorable games against the Bobcats in my time here and this is sure to be another special night in the series.”

Rex was planning on attending Buchholz high school, where he hoped to continue playing baseball with the Bobcats. He would have been a freshman at Buchholz this year.

“We are honored to have the chance to support the Rex and Brody foundation. It’s great to see our community come together for such a great cause,” Buchholz Varsity baseball Head Coach Ron Brooks said.

On Thursday night, both the Bobcats and the Hurricanes will be suited in special jerseys to honor the Rex and Brody Foundation.

Rex and Brody’s mother, Minde Prince Reinhart, will throw the first pitch of the game. Additionally, the catcher will wear Rex’s glove.

The pregame honorary activities are set for 6:30 p.m. while the game will begin at 7 p.m.

Thursday is the first of the two-game series between Buchholz and Gainesville. The second game will take place on Friday.

The Rex and Brody Foundation

The memory of Rex and Brody lives on through their Foundation and the hearts of friends, family and the Gainesville community. The Rex and Brody Foundation promotes a cause most dear to the boys by raising funds and support for young baseball players.

Furthermore, the Foundation has already been able to provide support to over ten local high school baseball teams, and sponsor a local team to play in Rex and Brody’s honor in Cooperstown, NY at a national tournament.

Additionally, the Foundation is organizing a baseball tournament with a national youth baseball organization that will allow over 200 baseball teams to come to the area in a few weeks time. 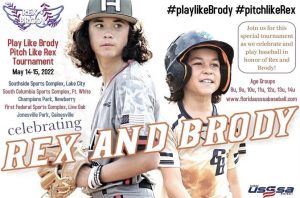 Furthermore, the Rex & Brody Foundation has begun to improve the facilities at the Jonesville Sports Complex with a covered batting cage and bullpen area. In addition, there are future plans for more athletic facility improvements at local schools and scholarship opportunities for young athletes.

The Rex and Brody Foundation will have their kickoff event on May 5 from six to ten p.m. The event will take place at the Touchdown Terrace at Ben Hill Griffin Stadium.

Ellie is a second-year sports and media journalism major at the University of Florida.
@ellie_shreve
Previous Tampa Bay Rays Struggle in Game 3 Against the A’s
Next The New Orleans Pelicans defeat San Antonio Spurs 113-103 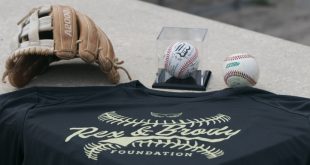