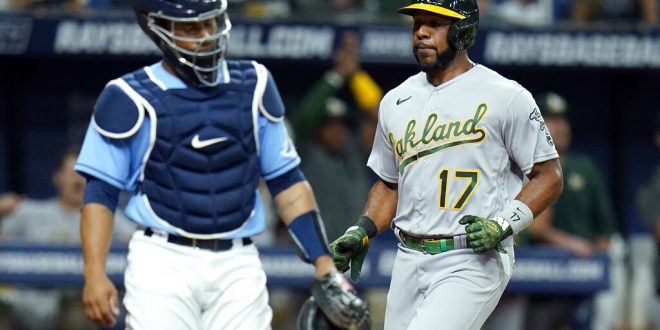 Tampa Bay Rays Struggle in Game 3 Against the A’s

After taking the series with a clean sweep against the Orioles, the Tampa Bay Rays are struggling against the Oakland Athletics. The A’s took game one in a blowout win with a final score of 13-2. The Rays took the next game 9-8, and the A’s took Wednesday’s game over the Rays 4-2. The teams will face once again today at 1:10 p.m. to close the series.

The final game of the series and the homestand starts tomorrow at 1:10pm pic.twitter.com/A0Xx2MZb0X

Oakland pitcher Frankie Montas only allowed two runs and five hits as he pitched for 6 1/3 innings. Montas struck out six to carry the A’s to a win.

Then in the fourth inning, Ji-Man Choi with Tampa Bay got a solo homer that put the Rays on the board.

The lone run for the #Rays today off the bat of Ji-Man Choi.

Shane McClanahan was pitching for the Rays on Wednesday afternoon, but he was not able to pull out a win as the A’s stayed fiery. Sean Murphy, catcher for Oakland, hit a three-run homer against McClanahan for his first homerun of the season. McClanahan gave up three runs, three walks and two hits. He also struck out eight in 4 2/3 innings.

“It was just kind of a frustrating day,” McClanahan said, according to ESPN. “I thought I threw the ball well and the results weren’t there.”

The A’s brought in Lou Trivino to relieve and he got his first save in the ninth to get out of a two-out jam. Trivino gave up a single to Rays catcher Francisco Mejía and walked Brandon Lowe before inducing a foul popup from Wander Franco.

The Rays selected Dusten Knight, a relief pitcher, from Triple A-Durham. They also opened a spot on the 40-man roster by transferring right-handed pitcher Luis Patino from the 10-day injured list to the 60-day injured list.

On the mound for the fourth and final game of the series will be Cole Irvin for the A’s and Josh Fleming for the Rays.

Previous Ace On And Off The Field: How Troy Freeman Has Found A Home With Oak Hall Baseball
Next Buchholz and Gainesville to Honor Rex and Brody Foundation