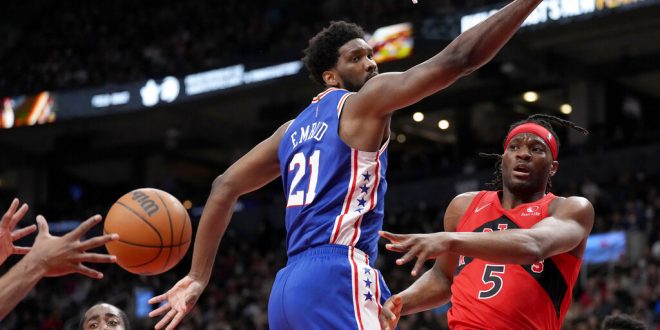 The Toronto Raptors are taking on the Philadelphia 76ers in the first round of the 2022 NBA Playoffs. The two teams were only separated by three games this season. The Raptors won the regular season series 3-1, and each of the four games were decided by less than three points. Game 1 is set to tip-off tomorrow from Philadelphia at 6 p.m.

The Philadelphia 76ers ended the regular season with a 51-31 record, landing them the fourth seed in the Eastern Conference. Led by Joel Embiid and James Harden, the Sixers look to make a push for their franchise’s fourth title.

The Sixers starting center, Embiid, has been nothing short of excellent this season. Embiid finished the season averaging 30.6 points per game on nearly 50% shooting from the field. He also dominated the boards at 11.7 rebounds per game. Taking home the 2021-2022 scoring title, he is the first center to lead the league in scoring since Shaquille O’Neal did it in the 1999-2000 season. Joel is also one of the leading candidates to receive the Most Valuable Player award.

In this upcoming series with the Raptors, Joel Embiid will be the X-factor for any possible success that comes to Philly. The Raptors are going to throw multiple bodies at him in attempt to slow him down. If he continues to dominate, fans should expect big numbers from the big man.

On Feb. 10, 2022, the Philadelphia 76ers completed a blockbuster trade that landed them one of the NBA’s greatest scorers of all time, James Harden. Harden is coming from a Brooklyn Nets team that was taking some of his shine away. He was paired alongside all-stars Kevin Durant and Kyrie Irving who evidently took away a lot of the shots that he wanted. Coming to Philly, Harden would be put alongside Joel Embiid, creating one of the best duos we have ever seen.

Recently Harden has been struggling to shoot the ball from beyond the arc. Since March 31, Harden has been shooting a staggering 26% from three. He also has a reputation to perform under par in the NBA Playoffs. This is worrying many Sixers fans as James’ shooting is essential in the Sixers winning the series. If Harden is able to find his shot, the Raptors will have a tough time on defense.

The Toronto Raptors concluded a great regular season as the fifth seed in the Eastern Conference, posting a 48-34 record. The Raptors have a young talented squad lead by Pascal Siakam, Fred VanVleet, and Scottie Barnes.

A Star in the Making

In the 2021 NBA draft, the Toronto Raptors used the fourth pick to select Scottie Barnes out of FSU. Scottie has been sensational this season, as he is currently one of the favorites to win rookie of the year. He averaged 15.3 points, 7.5 rebounds and 3.5 assists per game. Barnes is a versatile player who has impressive length and athleticism for a 6-9 guard. He most recently won rookie of the month for April. Toronto will be relying on Barnes to make plays all around on offense and to guard players such as James Harden, Danny Green and Tyrese Maxey.

The Raptors offense is centered around forward Pascal Siakam. Pascal is a one time all-star and has one all-NBA selection. In the 2019 Playoffs, Siakam helped lead the Raptors to the franchise’s first title. He finished the season averaging 22.8 points and 8.5 rebounds per game. With many young pieces on the squad, Siakam is going to have to keep the team in control and disciplined throughout the series. Siakam will be thrown at the Joel Embiid multiple times in the series, so he has to bring his best defensive effort every single night.