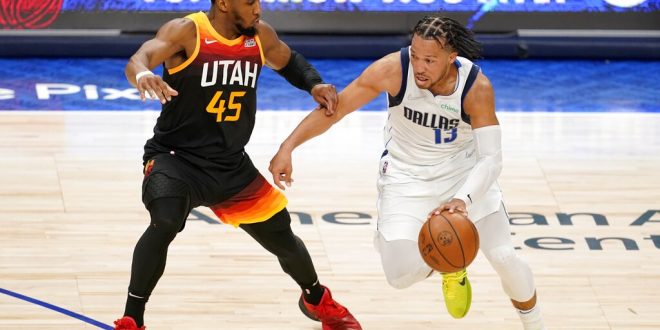 Mavericks Beat Jazz to Even Out Playoff Series

On Monday evening, the Dallas Mavericks beat the Utah Jazz 110-104 in Game 2 of the Western Conference playoffs. After trailing for most of the game, the Mavs outscored Utah by 10 points in the fourth for the victory. The next game of the series will be played on Thursday night.

Overall, the Mavericks played an all-around strong game. They made 22 3-pointers and had only three turnovers, their fewest ever in the postseason. But the star of the show was point guard Jalen Brunson. He scored a career playoff-high of 41 points to lead the team. Brunson is just the fifth Dallas player to ever score over 40 points in a playoff game. On top of his impressive shooting, Brunson posted eight rebounds and five assists.

Following him was a strong performance from Maxi Kleber. He had eight of the 22 3-point shots and put the Mavs ahead of the Jazz with just over four minutes of play left. The Mavs played very well despite being without injured star player Luka Doncic. Eight days ago, Doncic strained his calf in the regular season finale. Mavericks head coach Jason Kidd said he is hopeful that Doncic will be back in the near future.

Jazz Falls Short in the Fourth

Utah was tied with Dallas in the first quarter but found a four-point lead by the third. However, they were not able to hold off the Mavs offense for a win. Despite falling short, Donovan Mitchell still played a strong game. He dropped a total of 34 points for Utah. Alongside him, Bojan Bogdanovic scored 25 and Jordan Clarkson had 21. Rudy Gobert had impressive rebounding prowess, collecting 17 on the night.

Before the game, Mitchell discussed Utah’s strategy for success. He said the team will strive to stay focused in every moment of the game and not look too far ahead. After falling short, the Jazz will likely try to execute this message better going into their next game.

The next game in the series will be in Utah on Thursday night. Aside from the homecourt advantage, Utah has come out victorious against the Mavs in their last 11 home games.  The tip-off for game three will be at 9 p.m.