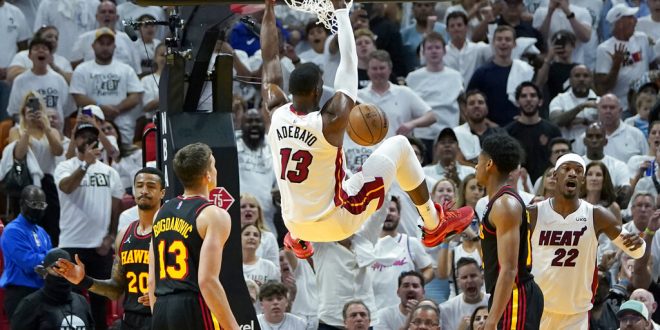 The shooting was hot in Miami as the Heat beat Atlanta 115-105 behind a Jimmy Butler career performance in Game 2. With the win, the Heat take a crucial 2-0 series lead over the Hawks in the First Round of the Eastern Conference Playoffs.

Butler finished with a playoff career-high 45 points on 15 of 25 shooting. He added five rebounds and five assists while hitting 11 of 12 free throw attempts.

"It can be done in a lot of different ways."

Additionally, Max Strus hit three three-pointers on his way to a 14-point performance. Off the bench, Tyler Herro added 15 points on five of 11 shooting, while Gabe Vincent scored another 11 points.

For Atlanta, Bogdan Bogdanovic led the way with 29 points off the bench including five three-pointers.

BOGDAN IS LOCKED IN.

With Miami holding a late lead, Bogdonovic kept the Hawks in the game with 19 points in the fourth quarter, including a three-pointer to put the score at 104-101 in favor of the Heat. From there, Butler took over, and the Hawks were not able to keep it close.

Butler scored the next seven points for Miami, including a step-back three to take an eight-point lead with 1:36 left.

JIMMY BUTLER FOR 3 ON TNT.

After the game, Butler credited card games and a certain boy band for getting him in the right mindset heading into the game.

Trae Young improved upon his eight-point Game 1 performance with 25 points on 10 of 20 shooting from the field. However, his long-range struggles continued with a two for 10 performance from deep in Game 2. Through the first two games of the series, Young is shooting one two for 17 from deep, but he did improve his overall shooting numbers in Game 2 after only going one for 12 in Game 1.

The series moves to Atlanta for the next two games beginning on Friday. The red-hot Heat look to take a crucial 3-0 series lead, while Atlanta looks to defend home court and get back in the series before it’s too late. Game 3 is set for a 7 p.m. start at State Farm Arena with television coverage on ESPN.