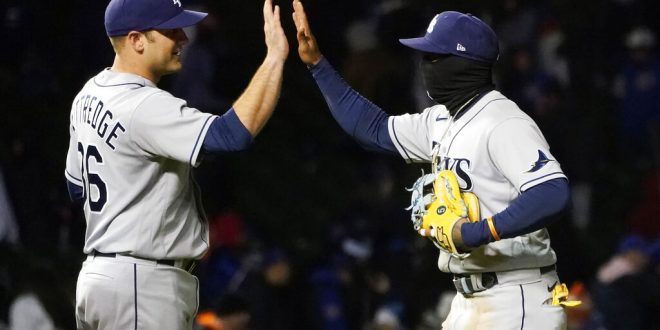 Franco, Rays Even Series with Cubs

The Tampa Bay Rays beat the Chicago Cubs Tuesday by a 6-5 score in part to Wander Franco’s big day at the plate. The series is now even at one game each after the Rays fell in game one.

The Rays made several changes in their lineup from game one. Kevin Kiermaier sat on the bench after going 0-for-4 with three strikeouts in game one. Ji-man Choi also sat for the second game. Manuel Margot took Kiermaier’s place in centerfield, and Franco also joined the starting lineup at shortstop after missing Game 1 due to quadricep tightness. Matt Wisler started on the mound for the Rays to serve as an opener.

The Cubs also made some lineup changes for Game 2. Jonathan Villar was added to the starting lineup and hit leadoff. With Villar at leadoff, Nick Madrigal was slid down to the six spot. Jason Heyward also started in Game 2, as the Cubs were playing the righty/lefty splits. The Cubs started Justin Steele on the mound, making his third start of the season.

The 21-year-old Dominican star was making his first appearance at the historic Wrigley Field. With his first game at the friendly confines, the hot-hitting shortstop had his best day at the plate of the season.

In the top of the third, Franco went deep to left center for his first home run of the season. He drove in Randy Arozarena to make it a 3-0 ballgame.

Franco had another extra-base hit in the fifth with a double into left center. Arozarena made a break for home, but he was gunned down by Nick Madrigal to keep the Rays lead at one. The Rays challenged the call, asserting that Cubs’ catcher Wilson Contreras blocked the plate, but the call was upheld. In the ninth inning, Franco singled off of Michael Rucker for his third hit of the night. The single left Franco just a triple shy of the cycle on a three-for-five night with two RBIs. Franco also extended his current hitting streak for four games.

Alongside Franco, Brandon Lowe had a multi-hit game. Lowe had an RBI single in the third, driving in Harold Ramírez to put the Rays up 4-0. His second hit came as a leadoff single in the eighth inning. The Rays had a two-run seventh inning, where Randy Arozarena doubled a run in, and then scored himself off a single from Harold Ramírez.

Chicago’s bats produced on the scoreboard too. Despite only having five hits, the Cubs still scored five runs, largely coming from a three-run fourth inning. Frank Schwindel doubled to score Ian Happ, then Patrick Wisdom, pinch-hitting for Jason Heyward, homered to drive in Schwindel.

Patrick Wisdom is 8 for his last 13 with five doubles and two home runs. #DailyWisdom pic.twitter.com/P2XfJSG31f

The Japanese phenom Seiya Suzuki saw his nine-game hitting streak come to an end. As he had three walks in last night’s game, his only official at bat was a groundout to second.

Both teams went deep into their bullpens. The Rays used six pitchers over the course of the game. Wisler opened with 1.2 innings, and Josh Fleming added another 3.1. Andrew Kittridge closed the game for Tampa Bay, retiring six batters in a row to pick up his second save of the season. The Rays sent Cubs’ starter Justin Steele packing early, scoring four runs off the lefty in 2.2 innings.

The win for the Rays puts them back to .500 with a 6-6 record and evens the series with the Cubs. For Chicago, the loss drops them to 6-5, sitting just one game behind the NL Central leading Cardinals.

Game 3 takes place Wednesday at 7:40 p.m. Drew Rasmussen is starting on the mound for the Rays against Marcus Stroman of the Cubs.

Jack Shivertaker is a senior at the University of Florida pursuing a degree in Journalism with a focus on sports media.
@JackShivertaker
Previous Heat catch fire, take 2-0 lead over Hawks
Next Florida Men’s Tennis To Compete In SEC Tournament