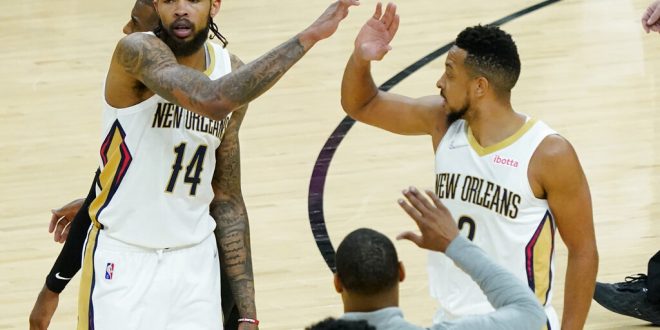 New Orleans Pelicans Even the Series Against Phoenix Suns

After winning game two against the Phoenix Suns 125-114 on Tuesday, the New Orleans Pelicans will now head home with the series even at 1-1. Game three will take place on Friday.

Young Star Shines For the Pelicans

When the Pelicans made the trade to acquire Brandon Ingram, they were planning for the future and the star he could blossom into on the team. On Tuesday, Ingram reassured this.

Ingram fell just shy of a triple-double in just his second playoff game of his career. He went 13-for-21 from the field, scoring 37 points overall. Additionally, he grabbed 11 rebounds and had nine assists in 39 minutes on the court. In the first half, he only had 11 points. However, the second half would be a different story as he went on to score 26 points and get them the win.

His performance versus the Pelicans only brought positive words from his teammates and coaches. In the post-game press conference, head coach Willie Green spoke highly of his young star’s performance.

"He just played with force."

Suns Fall Short of the Pelicans in Game Two

Game two would be a back-and-forth contest for most of the first half. By the end of the first quarter, New Orleans led 30-28 despite Devin Booker’s 16-point outburst. Booker put more pressure on the Pelicans’ defense with his 15-point second that pushed the Suns in front by halftime, including a buzzer-beating three from the half-court logo.

At half, the Suns led the Pelicans 61-56. However, this is where Devin Booker’s night finished. Booker had to leave because of a hamstring injury and will receive treatment and testing before game three according to ESPN’s Brian Windhorst.

The Pelicans did turn this game around coming out of halftime. They finally took the lead back four minutes into the third. With 8:08 left in the quarter, Brandon Ingram hit a three-pointer that put them in front 69-67. Eventually, the Pelicans used this momentum to give them a 90-83 advantage going into the final 12 minutes of the game. In this third quarter, the Pelicans outscored the Suns 34-22. To begin the fourth, the Suns went on a 7-2 run that brought the score to 92-90 in favor of the Pelicans

From this point, it would be tightly contested until around the five-minute mark. In the final five minutes of this game, Ingram scored 10 points to close it out over the Suns and to take game two of the series.