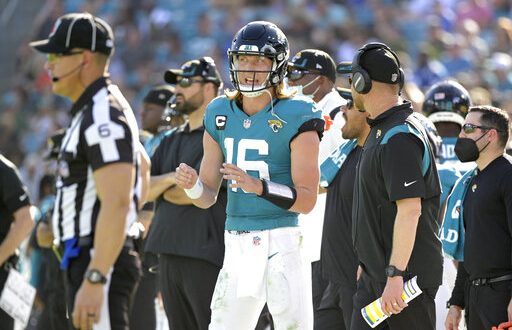 Trevor Lawrence said he looks to take the next step in his NFL career.

Last year’s No. 1 overall pick had a rough season. While throwing for 3,641 yards, he had more interceptions (17) than touchdowns (12). The quarterback also managed to run for 334 yards and two touchdowns but had three fumbles.

Lawrence admits that he was not great last season. However, he said he uses it as motivation.

“I think it’s important to just kind of learn from last year,” he said. “You don’t want to think about the bad things, but you want to use what you learned and not make the same mistakes.”

Lawrence said he is thankful for the lessons he learned last season.

Lawrence said he knows his play on the field will speak for itself. He credits being new as a reason for his lackluster play. He said he wanted to gain the respect of his teammates first.

“I can kind of skip the phase of, ‘Okay, I’m the new guy coming in,’” he said. “Now, I have a lot more confidence, and just the respect I’ve gained, [I] just kind of have to do my job and see where we land at the end of this thing.”

The Jacksonville Jaguars started the season on a five game losing streak. Head Coach Urban Meyer received much scrutiny for his conduct as the leader of this team. Yet, the team found a way to beat the Miami Dolphins in London for its first win of the season.

Three weeks later, Jacksonville shocked the Buffalo Bills in a low scoring game. The team looked like it may have been able to turn it’s season around.

That was not the case. The Jaguars would lose their next eight games. Meyer would be fired in that span.

Jacksonville finished the season with a win over the Indianapolis Colts, but held the worst record in the league. Therefore, the Jaguars have the No. 1 pick in the 2022 NFL Draft.

The Jaguars hired Doug Pedersen to be their next head coach on Feb. 3. He won the 2018 Super Bowl with the Philadelphia Eagles.

“He’s won a Super Bowl,” he said. “Being able to lean on that for him to help us is huge. Obviously, the goal is to win a Super Bowl.”

Lawrence said it helps that Pedersen was a quarterback when he played. Pedersen played for the Dolphins, Eagles, Packers and Browns.

“I think that’s big when you know your coach has been there, he’s been in your shoes,” Lawrence said.

Trey is a third year sports media major at the University of Florida, and a WRUF reporter.
@@treyboogie5
Previous Chris Doering talks SEC Football
Next Top-Ten SEC Softball Matchup This Weekend Between the Gators and Razorbacks