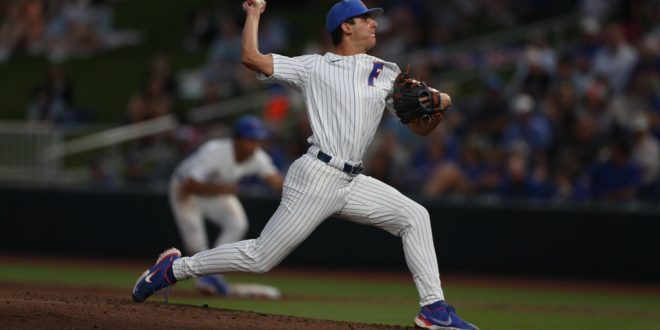 Florida Gators Baseball opened up their series with the No. 1 Tennessee Volunteers in the newly named Condron Family Ballpark last night. The final numbers on the scoreboard read 8-2 with the Volunteers on top. The Gators had three hits on the night while the Vols registered nine.

The Tennessee Vols got the scoring started fast and early in the top of the second. With the bases loaded up on no outs, a few singles were enough to move players around to home. Then, a 3RBI homerun by Trey Lipscomb put the score at 7-0.

The Gators did their best to respond in the third. Colby Halter grabbed an unearned run after Sterlin Thompson grounded out to first base.  The Vols put themselves on the scoreboard again in the fifth inning. Cortland Lawson flied out to the infield to bring in another runner.

The scoring wrapped up in the bottom of the fifth when Mac Guscette launched a ball out to left field for a homerun, bringing the score to 8-2.

Ryan Slater started on the mound for the Gators and managed to strikeout two and allowed seven hits. Anthony Ursitti then took over and had a great outing. In his 3.2 innings of work, Ursitti threw 27 strikes to strike out three batters.

According to Head Coach Sullivan, “He’s throwing across the plate. He’s been eager to get back out there some more. We’ve had a couple of talks. He’s kind of voiced that he wants some more opportunities. Tonight, he took advantage of it for sure.”

Parker Welch is a Senior at the University of Florida majoring in Sports Media at the College of Journalism & Communications.
@parkerrwelch
Previous Oak Hall Eagles Soar To Sixth Straight Win And Complete Season Sweep Of P.K. Yonge
Next Gators Baseball Blanked By Volunteers