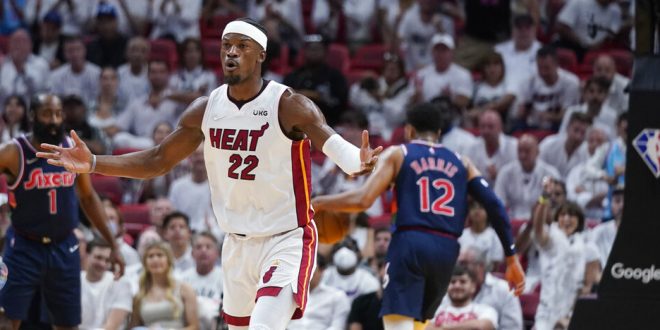 Miami Heat forward Jimmy Butler (22) celebrates after scoring during the first half of Game 5 of an NBA basketball second-round playoff series against the Philadelphia 76ers, Tuesday, May 10, 2022, in Miami. (AP Photo/Wilfredo Lee)

The Miami Heat are looking to close out the series tonight after their blowout win vs 76ers.

In Game 5 at home, the Heat blew out the 76ers 120-85 on the heels of a a strong defensive performance, holding the 76ers to 37% from the field and 28% from three. This combined 23-point performance from Jimmy Butler and six other double-digit scorers led to the 35-point win.

Despite this, the Heat understand how difficult it is to repeat a performance like this, especially when trying to close out a series in an environment like Philly.

With Joel Embiid missing the first two games with a face injury, the Heat were able to capitalize, and win both games, at home. In game one, Tyler Herro led the Heat in scoring with 25 points on 9-17 shooting and four threes on way to their 106-92 victory. Bam Adebayo had a 23-point performance along with Jimmy Bulter’s 12 assists in game two. This helped lead them to a comfortable 119-103 win. When Embiid returned from injury, Philadelphia responded in the series with two-straight victories of their own to knot the series up 2-2.  The Heat have also kept 76ers star James Harden at bay. During this series, they have kept him to shooting 39.6% from the field and 31.2% from three.

Heat Step Up in Lowry’s Absence

The Heat are hoping Kyle Lowry returns from his hamstring injury soon, but until then, they look to other players to step up in his absence. Gabe Vincent stepped in for Lowry in the starting lineup in games one, two and five and is coming off of a 15-point performance, Tuesday. Lowry has been ruled out for game six, so a similar performance from the third-year guard could help propel the Heat to move on to their second Eastern Conference Finals appearance in three years.

Gabe got the start and produced another solid performance pic.twitter.com/NBnZVufpcX

Butler will continue to be the primary playmaker for the team, along with finding the right balance of scoring as well.

The Heat face the Sixers Thursday night at 7 p.m. in Philadelphia at the Wells Fargo Center.