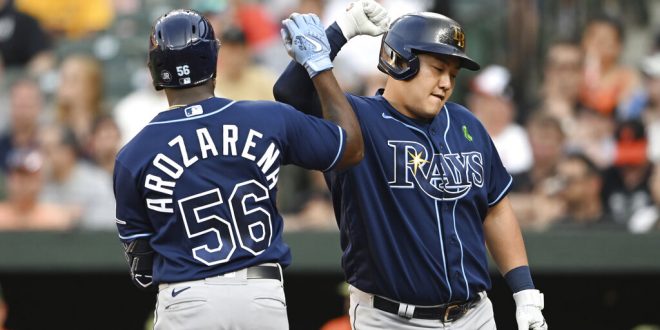 Tampa Bay Rays' Randy Arozarena, left, is congratulated by Ji-Man Choi after hitting a two-run home run against the Baltimore Orioles during the first inning a baseball game Saturday, May 21, 2022, in Baltimore. Choi scored on the play. (AP Photo/Gail Burton)

The Rays have had fantastic pitching all season. They are currently ranked sixth in team ERA (3.39) this season and second in WHIP (1.10).

The Marlins have also had great pitching and currently sits in fourth place in team ERA at 3.31.

The Marlins are top 10 in batting average this season with their second basemen Jazz Chisholm leading the team with a .290. Jazz has been an important player for this team leading the team in seven different statistical categories.

Tampa Bay will be getting young infielder Wander Franco back on the field after dealing with some nagging leg injuries. They will have to look to their heavy hitters like Brandon Lowe and Kevin Kiermaier to provide the big hits this team could use in this series.

This season the Rays have done well at home with a 13-9 record at Tropicana Field. On the other hand the Marlins are 8-10 in away games this season and look to change that this week against a strong home team.