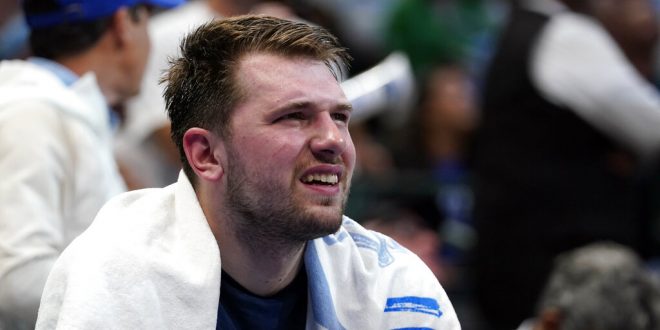 Dallas Mavericks guard Luka Doncic sits on the bench during the second half of Game 4 of the NBA basketball playoffs Western Conference finals against the Golden State Warriors, Tuesday, May 24, 2022, in Dallas. (AP Photo/Tony Gutierrez)

On Tuesday night, in Game 4 of the Western Conference Finals the Dallas Mavericks overcame the Golden State Warriors. It was a rainy day in Dallas, inside and outside.

Luca Doncic of the Mavericks scored a very impressive 30 points, 14 rebounds and 9 assists. Dorian Finney-Smith, in second to Doncic with 23 points and six rebounds. The Mavericks had six players overall in double digits.

Stephen Curry led the Golden State Warriors with 20 points. Overall, it wasn’t a total loss for Stephen Curry, he had his 100th 20-point playoff game.

The Turning Point for the Mavericks

In the second half of the game there was a delay because of a leak which cost everybody 16 minutes. This turns out to be the second time that the Mavericks game was delayed at the American Airlines center due to a leak.

Throughout the game and once it resumed after the delay, the Dallas Mavericks seemed to be in control with the game ending with a win of 119-109. Golden State Warriors still lead in the series with 3-1.

“I still believe we can win,” Doncic said. No NBA team, however, has ever won a playoff series after being down 3-0. Only three teams in total have forced a 7th game with a deficit similar.

Game 5 will be held Thursday night.

During the pregame press conference, Golden State Warriors head coach Steve Kerr made an emotional speech about gun violence saying “we cant get numb to this.”

Dallas Mavericks head coach Jason Kidd also shared a similar thought before the game. A moment of silence was then held before tipoff.